Sorry I've been a negligent blogger,  The Scientist and I have "discovered" The Wire, and have been mainlining it in unseemly chunks, which cuts into my evening blogging time :)

I thought I had reinstalled Gilbert's rear wheel for good this weekend, but it rained on Monday, and when I took off this morning, I only got a few blocks before he started making a horrid rubbing noise, which turned out to be the shifter cable not being properly snapped into its housing and rubbing on the chain.  So I turned around and swapped him for Minerva, and then headed to work.

I was terribly late, but while riding across the Longfellow, I spied a familiar profile ahead- Mark, a sometime reader of the blog, who I see from time to time on our commute.  Something looked different about his bike, and as I got closer, I realized that it was a completely different bike, but not a completely unfamiliar one- as he'd bought Velouria's Gazelle, and rechristened it "Pauline" after his German Oma (grandma). 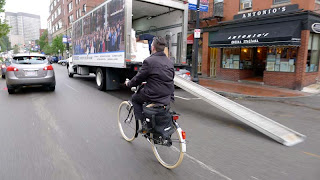 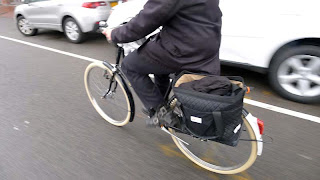 We rode up Cambridge Street together, chatting about the new bike, and how it compared to Minerva.  They're clearly so similar, but the differences are distinctive.  The most obvious difference is that Minerva's handlebars are lower.  Only an inch or two, but it creates a distinctive difference in posture. 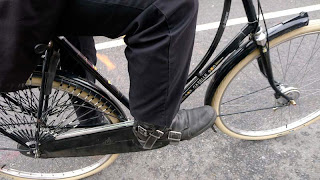 The Gazelle also has 27" wheels compared to Minerva's 28", but it's hard to see much of a difference. 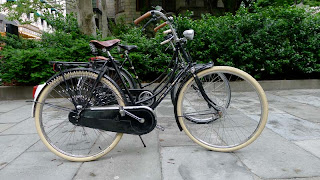 They both have drum brakes on the front, which he says he finds somewhat soft.  My drum brake at the front is so much more aggressive than the rod brake at the back, that I always think of it as my aggressive brake, but it's less than a caliper brake I suppose.  Pauline also has a coaster brake, which I have a hard time adjusting to, especially since I like to adjust my pedal at a stop. 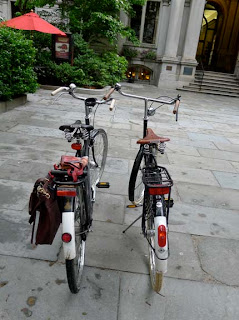 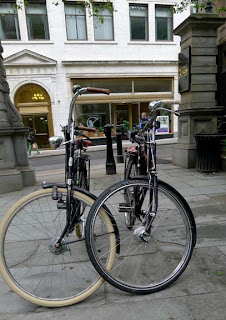 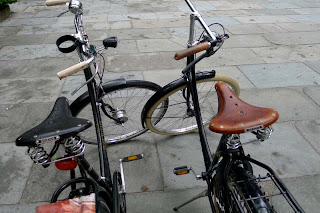 Even though Velouria has done it more systematically with her DL-1, I had to take photos of the two of them together to compare.

I keep repeating myself, but it's so nice to run into bike friends.  I can't even imagine seeing a friend driving in a car along the same route you're going, and then being able to drive along next to them for 5 or 10 blocks until your routes diverge, chatting as you go.  All in all, I was glad to be late enough to run into Mark and get a chance to appreciate his "new" bike