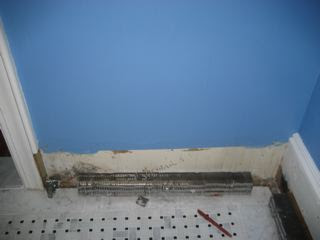 So, I haven't shared much of the "home remodeling work slightly beyond my comfort zone" on this blog, mainly because I'm in the final throes of a big project where I tiled our bathroom floor and shower, replaced the shower fixtures, put in a new toilet, new vanity (sink, faucet, marble top) new medicine cabinet and miscellaneous toilet paper holders shelves etc.

As could be imagined, I learned a lot during the process: about how thick mud mix should be,  how NOT to set mosaic tiles over electric heating grid,  and how important it is to have someone (in my case my Dad and my brother) from whom to get advice and encouragement.

Anyway,  one of the last finishing touches is putting in the heated towel bar.  We have hot water baseboard heat, and the plan was to remove a 2' chunk of the baseboard,  pipe up to the towel bar,  and pipe back down to the floor, where the pipe disappears and heads towards the boiler.  So simple right?  Getting an estimate for $500 to get a plumber to do it settled it in my mind.  I could do this myself!  While necessity may be the mother of invention,  cheapness is the mother of DIY. 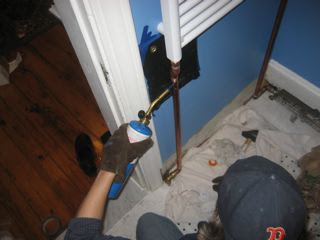 There were two issues that worried me.  First I would have to turn off one zone of the boiler, and possibly the whole boiler for as long as it took.  Although we haven't started heating the house yet, it's getting nippy, and by the end of the week it was going to be in the 40's during the day, so time was of the essence.  Fortunately our house is set up with four separate zones,  so theoretically I could just disable the second floor, but I was a bit concerned about it.  After it was all done, I was going to have to remove the air from the pipes so that it was just water moving through the radiators,  a process called bleeding, which sounded a bit tricky and messy.

The other issue was that I was going to have to learn to sweat pipes.   Copper plumbing pipes are traditionally joined by heating the connections with a propane torch, and applying solder, which is sucked into the joint, and makes a waterproof joint when cooled.   Aside from the obvious fear factor in hot metal and propane flame,  the problem with sweated joints is that they have a nasty reputation for  looking just fine from the outside, but failing when you hook them all up and turn on the water.  A mad scramble to cut off and depressurize the boiler zone when 180 degree water is spraying across the bathroom is nobody's idea of fun.

Still, encouraged by my brother (who, I might add, replaced all the piping in his basement recently), I decided that I could do that part.  And what the hey,  I already had a propane torch for making creme brulee,  might as well use it for its intended purpose! 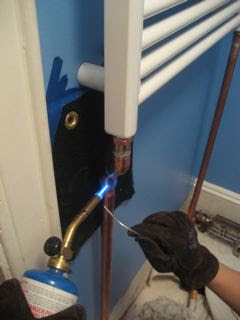 It took about 36 hours from start to finish (of course I slept and went to work for part of that time), but not too bad!  I did have to go to home depot 4 times,  and the 2nd time I went yesterday the plumbing guy said "are you still here?"  So I guess my cover was blown.   But we have heat,  the towel bar gets nice and toasty warm, and I'm looking forward to a wonderfully warm towel as I get out of the shower tomorrow morning!  That's something to smile about! 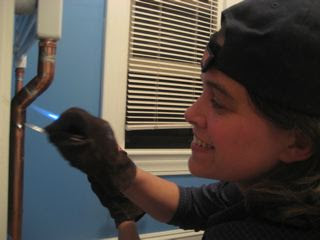