I had a good amount of time to read on the train.
I finished up two bike-y books that I've been reading for a while. 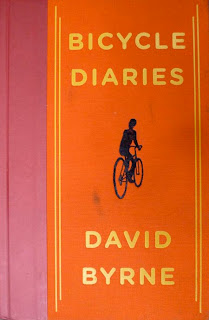 The first is Bicycle Diaries by David Byrne, which I bought at his Boston talk a couple of months ago. Aside from the last chapter, this is less a book about bicycling per se, than a series of anecdotes and meditations linked to stories about bicycling in various cities.
The links between the stories and the cities and each other is a bit tenuous and impressionistic. Sometimes it worked for me, in that it reminded me of how my senses and ideas are sometimes stimulated in seemingly random directions when I'm biking. Other times though (especially the Manilla and Buenos Aires chapters) it just felt random and disjointed, with some esoteric music and art world name dropping thrown in.

My favorite was the  NYC chapter, mainly because it was less of an exotic travelogue than a more densely textured observation of his everyday biking. I'm still processing my experience of biking in NYC, which was probably part of the appeal.  It was more of a meditation on urban quality of life issues and how bicycles are and can be part of how we live.  From his talk, and the character of this book, I would say that David Byrne is a reluctant advocate. He seems to say, "This is kind of crazy, but because people liked "Burning Down The House"  they for some reason are interested in what I have to say." "so I'll say Hey there's this thing I really like to do- it's fun and cool and not as scary as you think it is, and can be done by everyday people in their normal clothes.   Try it,  you might like it!"   I agree with him that it's kind of crazy,  but I'm glad he's using his "power" for "good"  and if it encourages others,  more power to him! 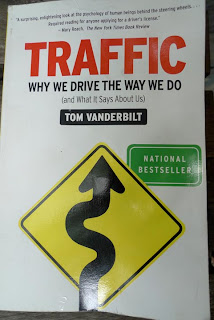 The second book which I finished on this trip was Traffic by Tom Vanderbilt.
As an architect with an interest in urban planning and a techie bent, I found the densely researched  (20 pages or more of footnotes) but conversational style of this book very engaging.  It's a bit like Freakonomics in style and tone- the blend of the personal and human with the experimental data.

Even before I finished it, it was one of those books I was constantly wanting to share with others, emailing bits to my brother, buying a copy to my Dad, constantly interrupting the Scientist's reading to share interesting tidbits with him.  Although not explicitly a bicycling book, I found that there was a lot of information which related to complete streets theories and many of my own observations of traffic culture. Vanderbilt is clearly a proponent of the new wave of traffic planning and urban design which is less auto-centric, and against the kind of highwayization and "safety" optimization that in the name of improving traffic flow and protecting pedestrians has turned so many suburban spaces into no-man's lands where drivers were encouraged to speed beyond the limits of their perceptions and reflexes, and pedestrians and bicyclists were discouraged.  There was a lot of scary stuff about how bad so many drivers are,  how limited our human perceptions are, and how little we do here to govern and improve the human side of the traffic equation, choosing instead to focus on improving road infrastructure and auto crumple zones.
What made this book engaging for me, was its concentration on the human element, through changing times and technologies, with all our foibles and mode-bias and inattentional blindness.   I think that a lot of Robert Moses old school traffic engineers missed this human element, and our roads and public spaces have suffered for it.    I know that this kind of thought is more completely understood by the traffic engineers who are coming out of school now,  but unfortunately they're still not necessarily the ones making the decisions in many jurisdictions.  It leaves me hopeful however for the future of American traffic planning.
Posted by cycler at 8:25 PM