Do I know you?

Dropped by the Scientist's office the other day to hand off a big package.  The package was easy enought to carry on my bike, but I wanted to go to the grocery store too, and neither wanted to carry the package in with me, nor leave it unattended at the bike rack.   There are bike racks along the front of his building, inhabited by a typical collegiate mix of old Raleighs and Schwinns, a couple of mountain bikey things,  and one noticeable standout- a genuine Dutch bike.

The stem rose higher than all the rest,  with the particular flat handlebar* that is similar but so different from north roads.  Loop frame, skirt guard, chain case,wheel lock, fenders, dynamo light, check, check, check and check! 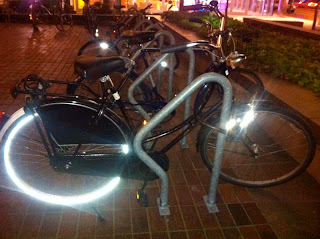 When I went up to investigate while waiting for the Scientist,  I had to laugh because the bike had a name-tag taped to the top tube  (photo omitted to protect the owner's privacy),  and I knew the owner! 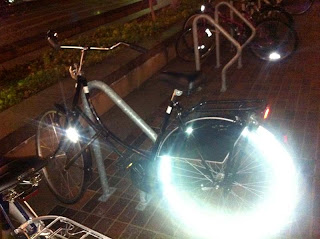 She's a postdoc in the Scientist's lab, from the Netherlands,  and I had just spent probably too much time at the lab holiday party talking to her and her husband about bikes.   They said that they had brought one bike with them, intended  for him, and that she had bought a bike in the US, but had been unhappy with it, and ended up "stealing" his bike (going so far to put her name on it).    She said that they'd been shocked at the cost of  imported dutch bikes here,  being accustomed to the easy availability of one speed workhorses..  One of the points they commented on specifically was how hard it was to get racks someone could sit on.

* I was trolling bike shop websites hunting for someone in the US that carries Hebie Bipod kickstands,  and noticed that the Dutch Bike Seattle carries the uniquely dutch straight handlebars, which I love the looks of, but had never seen available as a component.  Unfortunately I already have an extra set of handlebars floating around, and the aggravation of swapping them out is more than the additional aesthetic boost they would give my bike.
Posted by cycler at 10:06 PM