We finally have been getting snow and some of the winter weather that you would expect for January in Boston.   Woke up to about an inch of snow on the ground this morning,  which was fine for riding in,  and temps felt warm in the high 20's.  We're supposed to get 3-5" tomorrow,  but then on Monday it's forecast to be 47 degrees!  What???   In January??  Strange, but I suppose it will help clear the snowbanks.

Cambridge did a reasonable job of plowing or salting the bike lanes, but then the private businesses cleared their sidewalks by pushing all the snow into the bike lane.  GRRR! 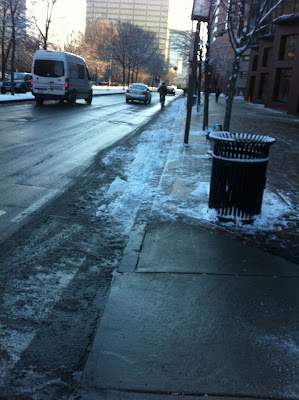 I think that businesses think "oh, there are no cyclists in this weather,  and there were fewer than usual, but there were two besides me that went by while I was standing there.
That is not actually legal, and I filed a report with the city,  we'll see if they can do anything- remind them that they're either supposed to store it on their property or remove it from the site.
Unfortunately while I was taking the photo and filing the report,  my bike fell over- I had it parked a bit on a slope, and it just tumped over.  Not the first time it has happened, but one of my cork grips broke, and something somewhere is rubbing on one of the wheels.  I couldn't determine the source at a stoplight.

When I bike in snow, I do my best to get the slush off  the bike before I bring it into the building by "dribbling it"  bouncing it up and down a couple of times- wiping  it off with my glove if need be.   Then I either park it on a big cardboard box, which we keep under a desk for such days,  or in the electrical closet which has a vinyl floor so that it doesn't drip on the carpet. 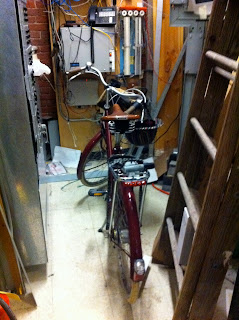 Tonight before I ride home, I'll see if I can find the source of the rub, and hopefully I can fix it with the tools I happen to have with me (vice grips and a couple of box wrenches).   I like to carry some tools with me for a week or two after I do a major repair, just in case something isn't completely adjusted or needs tweaking.
Posted by cycler at 12:14 PM