Nothing to see here

Sorry for the lack of posts lately- not much going on.  Riding my bike to work, to the library, to the grocery store, same old same old.

Ever since that glorious week when everything was bursting into bloom and we enjoyed record warm weather it's been cool and windy and often grey.  The one upside of the cool weather has been that the trees have clung tenaciously to their blossoms- much longer than they would have if the weather had stayed warm.   It's not precisely cold,  but it's cool enough that a jacket seems like a good idea when setting off,  only to be shed after the first mile or so.
Ran into Cris, a bike friend, riding home last Friday- there are so many bikers in my office neighborhood, it's a little surprising that I don't run into more of them more often.   We rode through Kendall and made a tentative date for me to pick up a bike wheel that I'd leant to a mutual friend and which had ended up at his house.
Saturday got away from me.  I ended up actually driving to Home Depot, because I draw the line at carrying full size propane tanks on the bike. With a trailer, no problem, but on the rack, no thanks.
I made a loop up to Market Basket,  a local grocery store, which reminds me of Fiesta in Houston in its multi-ethnicity.  I would go to great lengths not to drive a car to this store on a weekend.   The parking lot is a crazy place, with cars circling and lined up double parking.   The bike parking is kind of lousy- wheelbenders too close to the wall. 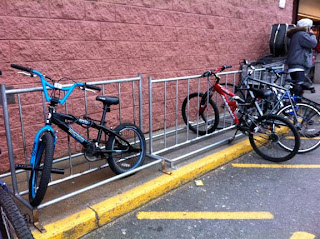 However Somerville did just install one staple rack in a convenient place on the adjacent side street.  For now, it feels like a secret, although I'm sure it will become a popular parking spot.
Heading back home I swung past Cris's house,  lucking out because he just happened to be returning from a ride to Groton (60 miles or so).  It made me feel like a slacker for riding my 3 miles to the store and back.  I picked up the wheel, strapping it on the rack, and headed to Trader Joe's. 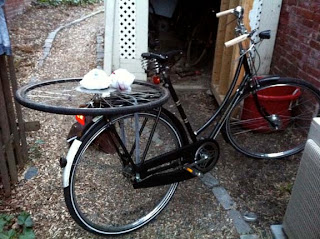 The Scientist and I decided to grill,  but as he put on his down jacket to tend the burgers, he admitted that we might have been pushing the season a bit!
This evening I was followed down Cambridge Street by Dave, the director of Mass Bike, and one of his co-workers.  I could hear them remarking on my helmet, so I turned around to say hi.  I wasn't sure if they didn't filter because I didn't filter, or it they're also converts to that approach to biking. I'll just say that not filtering makes my ride slower, but much less stressful than trying to squeeze between parked cars and possibly moving/ turning cars. 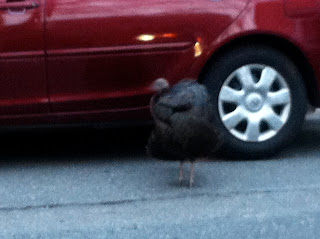 On the final stretch home, I was a little surprised to see a turkey, hanging out in the middle of the street.  The light was too low for good phone photographs,  but when I reprised the last part of my ride walking the dog, she was still hanging out there.  A woman was trying to feed her, and she said that the turkeys have been nesting in the tree outside her house.   Urban wildlife!
Anyway,  so it goes- not much to report, just the everyday bike comings and goings.  Hope everyone else is surviving early spring without too many complaints!
Posted by cycler at 9:03 PM