I bought a new helmet cover for my Yakkay while I was in NYC in October, but it took me a couple of weeks to actually get it on.   I like the "bucket hat" Tokyo helmet cover I had before, but it's very colorful, and when added to a colorful jacket it can be a bit much. 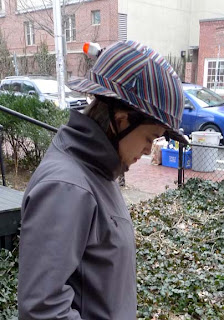 I really wanted a "Paris" in Herringbone, because I like the squared off shape, and the B&W goes with everything without being too boring. 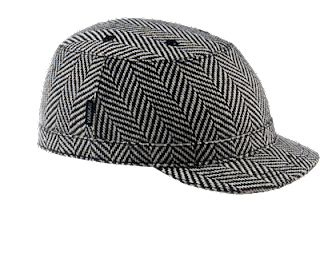 but at Adeline Adeline they thought it had been discontinued (they'd been out of my size for 10 months), so I got the similar "Cambridge" in a neutral check. 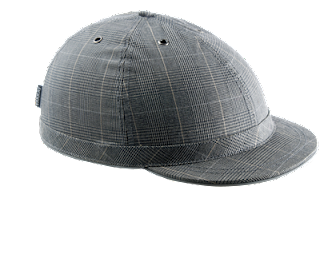 When I was removing the old cover and putting on the new one though, the plastic that reinforces the back of head strap snapped on both sides.  I wasn't pulling on it particularly hard- just holding it down while I stretched the elastic over the lip of the helmet, so I was really surprised that it snapped, especially on both sides.
That strap appears to screw into the helmet,  so I wrote Yakkay to see if they could send me a replacement of just that part.  They wrote me back promptly, and rather than replace just that part, offered to replace the whole helmet, and I got the new one in just about a week.

The new helmet has a different, and I think better rear stabilizer. (which is probably why they couldn't send me a replacement part).  The old system had a plastic stiffened velcro strap that you could adjust to tighten or release the helmet on the back of your head.


The new system is adjustable with a little wheel instead of the previous system which relied on a velcro strap (with plastic stiffener that broke) for adjustment.  The new system feels more secure and is much easier to adjust.  The padding at the top was a little different, but otherwise the helmet seems  the same.
So once I got the new helmet, I put the new cover on: 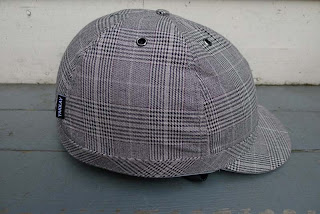 I also incorporated a little loop at the back to hold my light.  Because of the brim on the "Tokyo" style, and the direction of the stripes, on that cover I positioned the loop to hold the light horizontally.  On this helmet, it seemed to work better to put the light vertically, which overall is a better idea, because gravity helps hold the light in place. 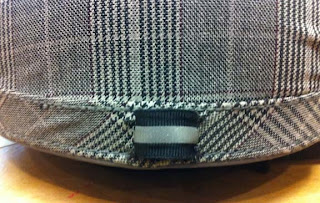 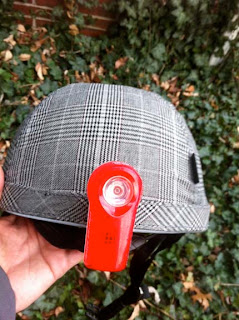 I do think that the Tokyo is more convincing as a "hat."  The volume of the brim on all sides helps camouflage the bulk of the helmet. However, I like the color and the style of the Cambridge, and the fact that it's more versatile.  I'm a bit disturbed that the helmet rear strap broke after less than a year in service,  but I was very impressed with Yakkay customer service, and as I said, I think the new system is a better one.

One thing I do like a lot about this one is that they incorporated a subtle reflective stripe on the brim and around the back.  (you can just see it in the last photo above)  I wish more manufacturers would do more like that.   (Nau, are you listening?- hint hint hint!)
A simple piping is easy to add during the manufacturing process, and isn't very noticeable if it follows the seams.  It's also very hard to retrofit- especially on a waterproof garment, or a complicated pattern like the helmet cover.

So far I haven't has as many comments on the new helmet-  I probably got a comment a week on the old one.  Probably because it looks less "hat like"  but I still think it looks unique and definitely not like I took a wrong turn and missed the peloton.

The city of Cambridge has been repairing a water line on Main/ Broadway just before the Longfellow bridge (in an area I had previously reported a water leak/ ice floe).   It's annoying enough that the bike lane is blocked and that the road is narrowed to a single lane, but the water line seems to be right under the bike lane, so the patched area is right in the bike lane.  Sometimes they just fill the trench with gravel, and other times they have a really awful temporary patch.  The patched area was really rough- so rough that when I merged over one day last week my coffee mug went flying when I hit the first bump.   It doesn't help that I'm going pretty fast because I'm in the lane with cars breathing down my neck through the constriction.

I called the city last week to inquire about the schedule of the repairs.  If the super bumpy patch was just temporary, it didn't necessarily make sense for them to fix it,  but if they thought it was "permanent"  it definitely needed to be fixed.  They told me that it was a temporary patch, and that the project would be going on until January, and that the final patch would go down then.   I told them that I was glad that it wasn't a final patch, but I that I was a bit worried that the weather would preclude a final patch before the spring, and that the current patch was dangerous for bikers.

So today I rode through, and the temporary patch has ben replaced with a nice smooth patch for the portion that is "complete"  I don't know if that was just part of the plan, or if they just needed to be told that the temporary patch was dangerous to bicyclists.  I'm really glad that they fixed it before the project was completely over.  I only hope that they can re-stripe it before the weather gets too cold.

Before it's too late

I've been struggling with what to wear when it's raining, but not very cold.  I love my Nau Shroud of Purrin trench,  but it's  too warm for anything above the low 40's.   I've flirted with the idea of a rain cape for a while but didn't love any of the traditional options.   After much deliberation, for my birthday I bought myself an Iva Jean rain cape.

I loved the silvery grey color.  And I was mostly satisfied with the look and fit.  The pullcords did work to free your arms,  and give it more shape than the "giant poncho"  look of traditional capes.   The problem was that it wasn't actually waterproof.   I rode in it a couple of times when I hoped it would rain, without any "luck",  and then I rode in it in the nasty snow-rain wintry mix we had a couple of weeks ago.   And it leaked.  My clothes underneath were quite damp in the 30 minutes it took to get home.   So I decided to return it and start looking for other alternatives.

Coincidently,  later that week Iva Jean announced that they would be making a waterproof version available in the spring,  and currently only available for "purchase"  from Kickstarter.
So for the first time I made a kickstarter pledge, and have reserved a waterproof cape for the spring.
The colors aren't quite as cool (light tan and olive)  but I think the waterproof-ness will make all the difference.   I'm often skeptical about Kickstarter wild and crazy ideas,   but Iva Jean obviously knows how to make these products and has been around long enough that I trust that they know how much it costs to make and deliver things, and that they will fulfill their pledges.

They also have three other new products that people not interested in capes might find intriguing:a blouse, a skirt and a vest.

The blouse is the least interesting to me- I don't think I'd wear it to the office, but it doesn't fit my weekend style either.   The pencil skirt would be more interesting if I liked pencil skirts generally, as that's one of the few styles you really can't wear on a bike.   This skirt has a zip out expansion panel just like the DIY solution that Let's Go Ride a Bike profiled here.  If you like pencil skirts, and don't want to sew your own, this is a great product.

Finally, the vest- which is the first "reflective vest" that actually appeals to me.  The ones from Vespertine are certainly cool and look great over a slinky tank top,  but I think not so great with a collared blouse or a regular outfit.  They're almost too dramatic- it feels like you have to design your outfit to not compete with the vest instead of it being something more like outerwear that plays well with whatever you have on already.

The Iva Jean one is more like outerwear- in a neutral silver and grey (one side reflective, one side the same material as the original rain cape.  Like the cape, it can be ruched up and shaped different ways, and is reversable for more or less reflectivity.

The original kickstarter goal was reached pretty quickly,  but you still have three days if you're interested in "buying" a cape, skirt, blouse or vest for a slight discount, and the chance to get it sooner.
Kickstarter page can be found here.
Posted by Cycler at 9:49 AM 5 comments:

Hello gentle reader.  Was looking at the blog and realized I hadn't posted for over a month.   Real life, in the form of work craziness, a bad cold, out of town visitors and emergency boiler repair, has kept me busy and not left me with any mental bandwidth for writing about bikes.  I apologize, and hope that ya'll haven't completely forgotten me.  When it's been such a long time, it's hard to restart- it feels like a big deal and like you have to "SAY SOMETHING,"   which increases the activation energy, and makes it even harder to start.  There is something to that momentum thing, in any endeavor.

So I'm going to start out slow- will try to follow up with more weighty matters.
I went to brunch Sunday with my friend K, who didn't learn to ride a bike as a kid.  She grew up in a very urban neighborhood (picture the south end)  and it was just easier to walk everywhere.  I helped her fix up a 70's 3 speed a while ago, and she learned how to ride it, but it's just easier  and more comfortable for her to take the T or walk most places.  So we met on Newbury St,  where she could take the green line, and I could ride down Mass Ave.

Almost all the way there I was following a woman with really cool fenders.  We actually hit almost all the lights, so I almost didn't have a chance to ask her about them.   She took wood fenders and dried flowers, and then shellacked the flowers onto the fenders- fender decoupage if you will.  It's a nice effect as you can see the texture of the flowers, it's not just 2D. 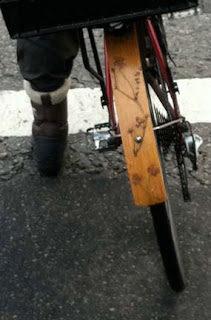 She also had fun christmas lights on her milk carton (kind of hard to see in the daylight. 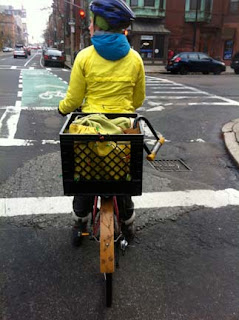 Walking down Newbury, I noted this sign in front of the Patagonia store, that they now offer bike delivery. Probably makes a lot of sense for local deliveries of light items like coats,  where parking would be ridiculous and a car cumbersome. 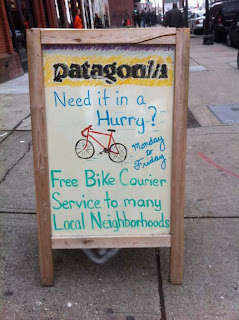 Speaking of bike delivery,  the Scientist had to work late on a tough deadline last Thursday,  and I ordered him and his team cookies from Insomnia cookies.  They delivered them from Harvard sq to MIT by bike deliveryman.    Again, makes a lot of sense.  It's not appreciably faster to drive than bike over that distance, and it's infinitely easier to park.  I didn't realize that they delivered by bike when I ordered them, but it's a definite plus in my book.