So many people biking these last couple of weeks!  It's still chilly in the morning, but definitely getting warmer, and we've been lucky to have pretty dry weather (don't know what that means for the May flowers).

While stopped at a light, I chatted a bit with this gentleman about the weather and our different strategies.  I had no jacket, but gloves on, he had a heavy jacket, but no gloves.  He was riding a classic Raleigh- they just never quit!  I really liked his purple shoes- they show a lot of personality: 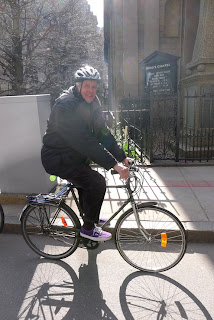 Two events- one tonight, one next month that I wanted to share.  Tonight is the "Spring Social"  for Livable Streets Alliance. It's a great chance to come and find out about what LSA has achieved this year (a lot of cool stuff) and our agenda for the next year. I'll be talking a bit about the Western Ave and River street bridge projects.  I always find that the people who are into livable streets are super cool people, so there's always someone interesting to talk to.  Tonight May 18th 6pm to 8pm at the Livable streets alliance offices 100 Sidney St in the Central Sq area.

May 21st is the 5th Annual Boston Bike Update, marking the return of Nicole Friedman!  It's later in the year than it usually is, which will make it even more popular if people aren't having to fight the February weather!  Since even with icky weather it's been incredibly packed the last couple of years, this year they're putting a system of pre-reserved tickets in place. So if you want to definitely get in the auditorium,  you can pre-register  here

Hope to see some of you at both events!  I'm going to try to bring the bakfiets to the social if you want to check one out in person.

Hello Everyone,
If you've left a comment recently, my apologies that they weren't posted.  Gmail evidently decided that all the comments were spam, so I didn't see notifications, and forgot to check the blogger interface.

Hopefully after telling Gmail that all those comments weren't spam it will stop tagging future comments and I'll be better about posting/ answering them.

Sorry for the confusion,  and hope you're all out enjoying the midnight marathon ride.  Hopefully some day I will have a job where I don't have to work Patriot's Day and I'll be able to stay up late to do the ride myself- it looks like a lot of fun!

A couple of notes

I had to completely replace Gilbert's roller brake and the brake cable and housing after my accident.  It took longer than I hoped because I thought I just had to replace the snapped cable and frayed housing, so I started the project once I had those things.  However halfway through the project, I discovered that the reaction arm of the brake was so badly bent (and too stiff to bend back)  that I needed a whole new brake unit.  Fortunately they're only $20 or so, but they've been discontinued, so I had to find one NOS on ebay (although in retrospect I think the new ones would work fine with the old hub) I couldn't find any information either from Shimano or the interwebs about how to install a roller brake, so I was apprehensive, but it ended up being simple.  You remove the bolt on the left (non drive) side,  and the roller brake just lifts off.  You put the new one in, meshing the splines of the brake with the splines on the hub, and tighten the bolt again, voila!  Of course I managed to loosen the nut on the drive side, and ended up disassembling the cassette joint on the drive side (the part that links the shifter cable to the IGH) which gave me a chance to flush the grit out of it, and took a bit of puzzling to get back together.  I even got the dremel tool out with the thought of cutting back the chaincase a bit where it seems like it still hits the dust cover of the hub.  However I decided I had better things to do with my Sunday afternoon and left it for another day.  I did have a chance to really clean all the grit off of everything, and waxed the fenders, oiled the chain and lubed the kickstand though which is nice.  I should spend some time with some polishing compound to remove the black smudges that I tend to leave on the downtube when I hit it with my shoe rubber.

The brakes work great now- maybe too great, as I managed to lock the rear wheel twice on my way home Monday, both times stopping for pedestrians launching themselves into crosswalks. I might dial them back a tiny bit if the cable stretch doesn't correct that in the next week.  Unfortunately the rear dynamo light isn't working now,  and the "plugging and unplugging" approach didn't fix it, so I'll have to put it back up on a rack this weekend to try to find the problem. sigh.

I went to a Longfellow Bridge meeting last night.  The good news is that there will be actual bicycle lanes during at least the first phase of construction in both directions.  They didn't have a diagram of where the lanes would be in the other phases, but they said that they would exist.  This will be an improvement on the unpleasant and dangerous "bicycle accommodations"  that were in place during the last round of work.  There will be another meeting in the next month or so to go over the "75%" plans, and work will begin in June/ July.

The bad news of course is that the bicycle lane will still be an auxiliary to the crash barrier (on the road)  on the inbound side instead of being a raised cycle track. The additional road width will also continue to encourage speeding on the bridge. I was also disappointed because the design build team doesn't have a bicycle/ pedestrian consultant, so the design for the important and complicated transitions at Charles Circle is being done by a generic traffic engineer, whose only experience may be designing freeway interchanges, not fine grained city intersections.

Tonight there's a meeting which should be more encouraging.  MassDOT is presenting the updated designs for the Environmental Assessment at  5:30 at the Honan-Allston library  300 North Harvard St, Boston.  I've heard that the plans are pretty good from someone who got a sneak peak, although there may still be a few issues.

UPS has finally approved the insurance claim, so I felt comfortable disposing of the giant box and all the plastic wrapping that the Bakfiets came in.   And how better to take it all to the recycling center than in the box of the Baks! 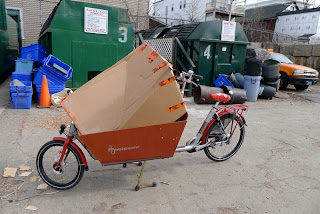 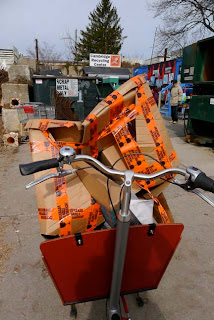 The guys at the recycling drop off center were really interested in the bike- it had 3 or 4 admirers by the time I got back from putting everything in the appropriate bin.