Boston has an unusually high number of European City bikes floating around for a place without a distributor of such bikes.  I suspect it's because there are enough students and academics who come here that a certain number end up importing their own bikes, not satisfied with the bike options they find here.

Just the other day, I sighted two such bikes in my evening commute alone.  Neither one is a brand I've ever heard of being distributed in the US, so they're almost certainly self-imports.  I would suspect that they're typical run of the mill  city bikes, nothing fancy or exotic- the classic bicycle as appliance.

The first one, which I see quite often actually, is a modern version of the type: 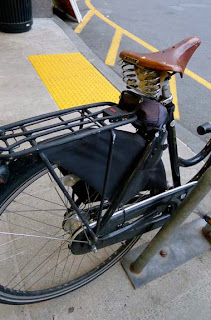 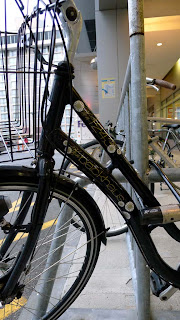 Searching the internets for information on the bike- I see that I've already photographed this bike in Cambridge at least once :)   It has a very distinctive coat-guard.  It also has a slightly fancier saddle (leather brooks) than most European city bikes do, which mostly make do with rubbery waterproof vinyl saddles.

The second bike is a little more typical of the everyday bikes that are used in the hundreds of thousands in many European cities: 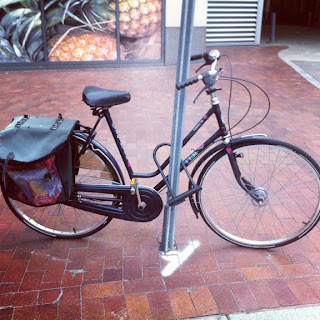 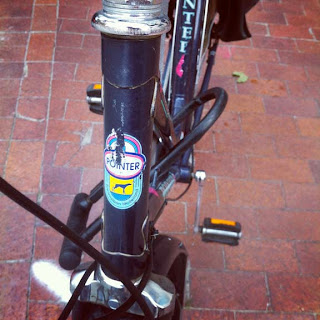 I like the head badge image of a pointer dog quite a bit.

I started my relationship with city bikes when I lived in Italy, and I self-imported the generic no-name city bike that I rode there to the US, and rode it for many years until it became too difficult to get replacement parts and the rust started to eat it alive.  Somehow I suspect that this flow of bicycles is one way, and that very few Americans who go to live in Europe bring generic Treks or Huffys to Europe with them.