(updated- I misread the statistic on increase of space as increase in employees- they probably track, but may not be linear- see below)

At long last, a year after the system opened in Boston,  the system is finally extending to Cambridge.
I took a minor detour on my way home to go down Mass Ave to check out two of the new stations!
Am looking forward to seeing where all the locations end up.  Hope there's one at my end of Harvard square- would be handy for combining with the T when I can't ride my bike for some reason. 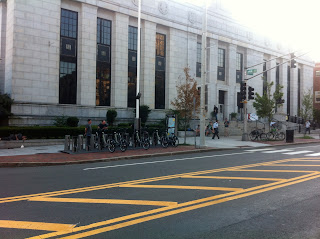 I know they're installing one at the West side of Harvard Sq- can't wait to see where else they're going.

There's been a lot of buzz about them on twitter, but I haven't heard if they're going in on the Somerville side of things yet.  Do you have any sightings from your neighborhood?

I was thinking, it seems like a larger percentage of those interested in biking in Cambridge already have their own bikes.  We also don't get as many tourists as the downtown areas of Boston.  I'll be very interested to see if the demographics of people using the bikes are different on this side of the river.

I read an interesting article that the Kendall sq area has increased the number of employees  amount of commerical and office space by 40% in the last decade but automobile traffic has actually been reduced by 14%.  Cambridge has been really active in requiring businesses to have a traffic management plan which encourages active transportation and transit and limits new parking.  Hubway will be a great new addition to this kind of planning.

(Second update:  map of first phase of stations can be found here)