Looks like the city of Cambridge is putting Mt Auburn Street on a diet-  a lane diet. I'm just guessing, but I suspect that there are too many tour busses trying to park in too few spaces, which ends up with them just parking half in the bike lane and half in the travel lane.  I suspect they're going to enlongate the tour bus parking area, and take the road down to one bike lane and one car lane. 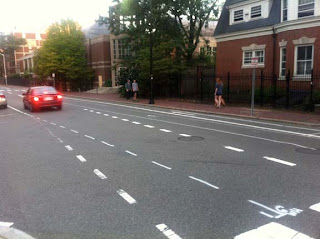 I'm a bit ambivalent about this.  One one hand, I think that one car lane is probably enough and it might slow traffic down a bit.  On the other, I am always nervous about riding next to tour busses- afraid that they'll pull out suddenly without checking their blind spots.  They also are not terribly careful about parking close to the curb, so even if they have a dedicated lane, they may park partially in the bike lane. Ideally, they'd make the bike lane wider to allow some buffer space if they're taking away a travel lane.
I don't feel bad about taking a lane when there are two lanes, but if it's down to one, it may become more uncomfortable.

They've progressed beyond these photos and ground out some of the old thermoplastic, but not put new paint/ thermoplastic down.  Am looking forward to a bit more clarity when they get the new markings in- at the moment its a bit confusing.  Although I think confusing isn't all bad- it slows people down as they have to actually think about where they're going!