Summer time, and there's lots of produce on counters- baskets of peaches, bowls of tomatoes, and piles of cucumbers. And where there's summer's bounty, unfortunately there are fruit flies.

To prevent your kitchen becoming an infested zone, I'm passing along a tip from the Scientist.
Unless you too are a scientist, you may not know that fruit flies are a very common experimental animal, and most major research facilities have at least a few "fly labs." The Scientist is actually more of a "worm guy," but there are fly labs on his floor, and there are always a few escapees.   He brought home a great trick, which they employ in lab to snag any escaped flies that might be buzzing around where they don't belong.  It turns out that fruit flies  are genetically programmed to crawl upward almost exclusively.  So if you can lure them into a trap with a tiny entrance at a low point, they'll crawl up to the (sealed) top and futilely attempt to find the way out until they die of exhaustion.

To make your own kitchen fruit fly trap, you will need:
A drinking glass (small),  A piece of paper, tape, and bait.
I usually use a splash of apple cider vinegar and a pinch of sugar for the bait.  Sometimes the tail end of a bottle of wine, or a bit of lemon juice.  In the labs I think they use yeast in the brew.  I'm sure you could make it of any fruit juice you had around.  Basically any fruity/alcoholic/vingar-ey brew you could throw together in 30 seconds of perusing your kitchen. 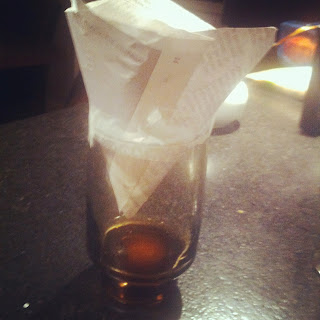 Tape the cone together, and tape the outer edge of the cone to the glass.  It doesn't work if the flies crawl up the outside of the cone, and up out of the glass.
Leave on the countertop, near your fruit bowl, or wherever you're having a problem. You'll need to replace it every week or so when the bait dries out,  but it's amazingly effective in reducing the number of flies buzzing around your kitchen
Posted by cycler at 10:01 PM