So the Scientist was back in town for about 36 hours before jetting off for more scientific adventures.  Rumor has it that this kind of gallivanting will slow after tenure.  And in general I don't mind a bit of time to myself, but the back to back thing gets old for both of us.


In any case, I decided this was a perfect time to play Empty the Freezer!
Despite the fact that I'm now canning the soups I would be stuffing into the freezer (did a batch of lentil soup and a big batch of broth this weekend) I have a tendency to tuck tiny portions of goodies into the freezer.  A single organic sausage,  half a portion of risotto,  part of a ham steak...  Not really enough to make a whole meal for two, but seemingly worth saving.  Unfortunately, too much of it tends to get shoved to the back and dug out months or years later, freezer burned beyond recognition and deposited directly into the compost bin.  I'm trying to be careful of food and to not be wasteful- I've been doing a version of this all summer called "use that CSA share" and now as the CSA share wanes, I'm moving on to a new frontier:

My challenge this week while he's away is to make dinner every night out of something from the freezer:

The rules:
1) Anything in the pantry or the fridge is fair game.
2) I have to use something in the freezer that wasn't a fully formed entree on its own.
3) Nothing is to go back into the freezer as a result of this exercise.
4) I can buy 1 ingredient per meal. 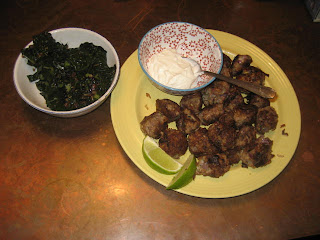 Lamb meatballs:
I knew I had not one but two pounds of ground lamb in the freezer, so when I saw this recipe from Mark Bittman, I put it in my mental file of "to try" recipes.

1 pound of ground lamb,
1/2 cup cooked brown rice (I didn't have bulgur in the house, rice worked fine)
1 medium red onion, chopped (should have chopped finer, it make the meatballs a bit hard to keep together)
a clove garlic,
1 tbs cumin
salt and pepper.
Mix together like meatloaf,  roll into balls, fry in a TBS of oils.

After I had finished turning the meaballs until they were browned on each side and the house smelled like lamb,  I pulled some blanched kale out of the fridge, and gave it a spin through the lamb flavored oil with two cloves of garlic as a side.
I hopped on the bike and made a special trip to WF for some greek yogurt to go with as my "plus 1"
Unfortunately there was no whole milk greek yogurt which I swear is better than Ben and Jerry's.
Yogurt with a squeeze of lime juice was a dipping sauce, and there were just enough left over for lunch tomorrow.
It was good enough that it's worth making again next week with the other pound of lamb that's lurking in there.  The Scientist will be so impressed that he'll probably even eat the Kale without complaint.
Posted by cycler at 8:46 PM