It's all about accessories

I get a lot of comments/ compliments on my helmet.
For some reason that seems to happen a lot in the grocery store.  I guess it's because I shop several times a week, usually on my way home from work and  often I'm too lazy to take off my helmet.  Fortunately in the stores in Cambridge it's not uncommon to see someone walking around in their helmet, so I don't feel that unusual.  The woman in the line ahead of me the other day complimented me on it.  I said that I had taken it off, but then my hands got full and it was just easier to wear it.  She said "well it will protect you from those tragic grocery accidents"  She had a helmet hanging off her bag, so I didn't take it the wrong way. 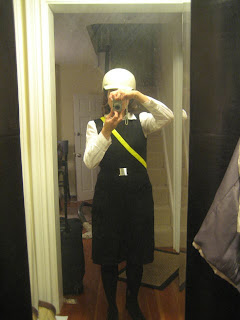 Grocery accidents aside, I really like my helmet,  and I think it almost works as a fashion accessory.  At least I don't feel foolish wearing it.   It's the "muse" helmet from Bern,  and I like the chipper styling of the brim.  It's very much like the helmets I used to ride horses in. 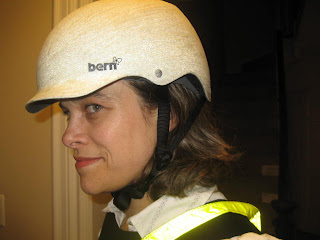 I believe that Bern started as a snowsports helmet company, and some of there helmets are bike approved and some aren't, so you have to be careful.   This one is bike approved in the USA, although it's not the most comfortable or adjustable helmet I've ever had. No vents means I can't use it for the hottest parts of the summer ( I have a generic swooshy one for August) and I (and my thyroid gland) wish it had some kind of back of the head adjustment band, so that  you could keep it aligned without cranking the chin band down super tight.

For me though, it's worth it  to have a helmet that doesn't make me look like I took a wrong turn and lost the peleton.
I've customized it with a coat of clear paint and a layer of the glass reflective beads that they use on signs.  I actually think it's not as reflective as a sign,  but it's better than nothing, and I rather like the bumpy matte texture.
Posted by cycler at 6:06 PM