Preserved lemons are a moroccan staple, with a very specific and unique flavor-  sweet, sour, salty and somehow rich.

I use them chopped up in couscous and tagines sometimes, but what I mainly use them for is a Moroccan spice paste called Chermoula.  It's kind of like the wilder, spicier cousin of Aioli,  with a base of olive oil, lemon juice,  preserved lemons, paprika and cilantro.  It's addictive and delicious, and tasty as a marinade or a sauce on anything. I mix it into plain couscous, top fish, chicken, veggies, anything with it.  I've been known to eat spoonfuls of it on its own, wriggling with delight.

I used up the last lemons of my last batch of preserved lemons (lasted about a year) over the holiday weekend, making a giant batch of chermoula for a BBQ.    So it was time to make a new batch.
It's very simple, and pretty foolproof as pickling/ preserving goes thanks to all the acid and all the salt.

Start with a bunch of lemons (I go to the haymarket for the cheapest lemons).  I used 8 to make a quart, but this will depend on the size of the lemons.  I would avoid the giant lemons that you sometimes see, and a lot of people like to use Meyer lemons, which seems like not the highest use for a fancy expensive lemon. 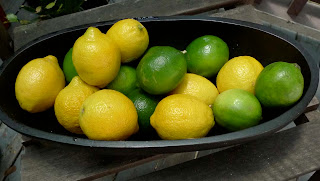 Wash them well with soap.  I scrub them a bit with a scrubbie, to try to get all the wax off. 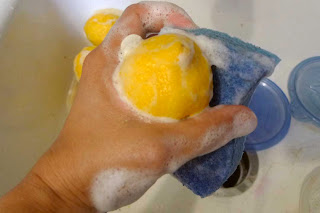 Cut each lemon in almost quarters-stopping the cut 3/4 though, leaving the four pieces attached at one end.  I don't think this is actually critical- it's just traditional- There were plenty I accidentally sliced all the way through, and they tasted just fine. 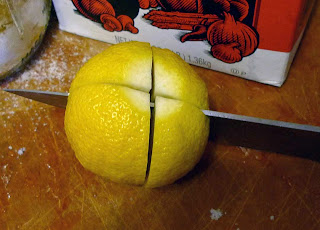 Wash a non-reactive glass or ceramic jar  (I of course, used a canning jar, but a lot of people use ceramic crocks).  put a good liberal shake of kosher salt in there (maybe 1/4 cup?)  I don't think that it's possible to use too much salt, and you're going to rinse the lemons well before you use them anyway. 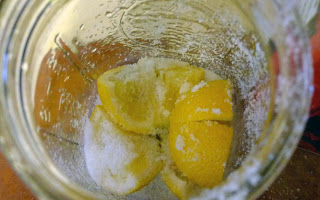 Pour salt on all the cut surfaces- open up the lemon kind of like one of those "fortune tellers"  that were so popular in 3rd grade,  and drop the lemon into the jar.  Pack 2 or 3 lemons in,  pack them down as tight as possible with a wooden spoon, and top with another layer of salt.

Repeat until jar is full.  The packing should have eliminated any voids and juiced the lemons so that the juice is almost to the top of the jar.    Top with a last layer of salt, put the lid on and invert a couple of times so that everything has been well bathed in salty lemon juice. 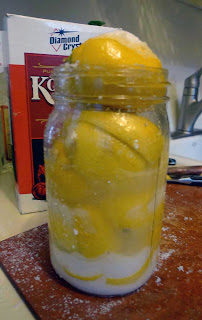 Let it sit on the counter for a couple of days, inverting it to shake it when you remember,  and then put it in the fridge.  Try to shake it once a week or so, and after a month they should be done.

When they're done, the peels will be soft and pliant, and the pulp will be soft and mushy.  The juice will be thick and syrupy in consistency.
To use, wash of the salt, remove the pulp (which is often too salty to use) and dice the rind and toss it into the dish.
Posted by cycler at 9:39 AM