The Metropolitan Planning Organization (MPO)  which attempts to do region-wide planning for all the towns and cities in the Boston area just released data from their latest bike/ ped counts.  Most of the locations are in/ around the Charles river basin,  so I don't know how these would compare to the counts say on Hampshire in Somerville, or Mass Ave in Central Sq. 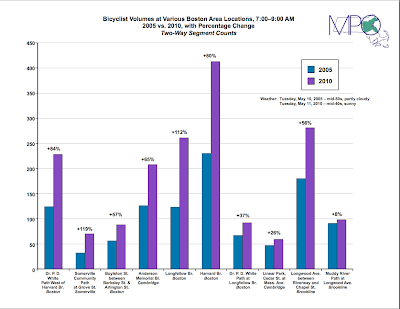 I think that it's very interesting that there's such a huge increase across all the bridges-  112% across Longellow,  80% across Mass Ave,  even 65% over the Anderson bridge, which is not fun to bike over, with no bike lanes, and a lot of traffic.   Also worth noting is the weather- despite it being May, the weather that day was MID 40's and still there was such a dramatic increase.   Imagine if it had been one of those glorious 60 degree days that feel like the most beautiful spring day ever?

I'm biased I know, but this seems like both confirmation of the increase I've seen in cyclists,  and a validation of "if you build it they will come" There's been a big increase in infrastructure in the last 3 years especially, and I can't believe that the uptick in numbers isn't related.
Posted by cycler at 5:28 PM