I was going to post today about riding in the heat (it's supposed to be 100 today, which is about as hot as it ever gets here).   However, my post was completely hijacked by two strange and rare events.
The fact that they both happened on the same day, within 1000 yards of each other makes me wonder if the stars are in alignment!
For our first miraculous event:  A state trooper pulling over speeding motorists on the Longfellow! 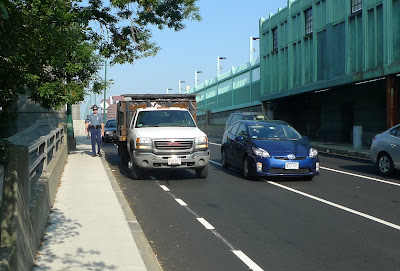 I have NEVER seen this in 5 years of biking this route.  I did a speed survey with an engineering friend whose company lent him their radar gun, and on the other side of the bridge (where the construction is) we found not a single motorist was obeying the speed limit,  and we had two (out of a sample size of about 50) that were going 20 miles above the 30 MPH speed limit.    There's never enforcement, except sporadically on the cambridge side of the bridge by CPD.  And yes, he's pulling people into the bike lane, but I'll not quibble.   I had seen him getting out of his car with radar gun in hand as I passed, and then walked back up from Charles circle to tell him I thought he was doing a great thing! He had already pulled over someone by the time I got this far, so I didn't want to mess with them. 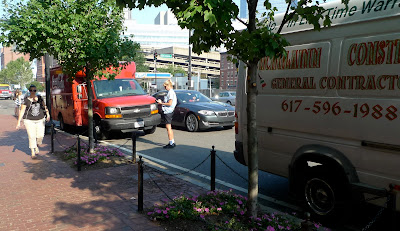 Cambridge street is always a slalom between people turning left and double parked delivery vehicles on the right.  It's actually usually not that hard for bikes to get through, but drivers get cranky and try to gun through small gaps, which can be dangerous. Considering how much it holds traffic up, I'm really surprised that there hasn't been more enforcement.   Traffic moved with record efficiency today with no double parked trucks at the top of the hill.
Posted by cycler at 9:26 AM