Just got back from a week's vacation in Denver/ Estes Park with my extended family.

It's funny how everywhere I go now, I tend to see things through a bicycle lens.  In Denver, I dragged my Mom over to the corner of a parking lot to check out the B-Cycle bike share program: 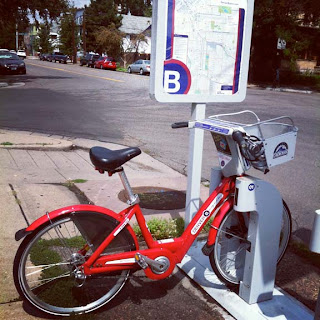 I think it's interesting that they come with an integrated cable lock.  I guess that bike theft isn't as much of a problem as it is in the Northeast. I'd be afraid to lock a bike that I was "on the hook for" with a cable lock, even for a few minutes.  It also may speak to the density of stations and the locations of destinations vs stations.  Boston's system is paired with a robust transit network, which completely changes the dynamic of parking the bikes. 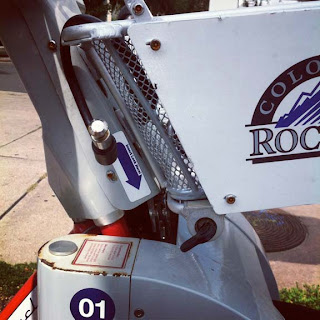 The basket seems nice- I think it might be more useful for a lot of people than the rack on the Hubway type (Bixi) bikes.   The bikes look (if possible) more clunky and heavy than the Bixi-type bikes.  Check out that extended bottom bracket/ gusset:

I chatted a bit with my brother's "across the alley" neighbor who has a garage full of drool worthy road bikes.  His Dad worked for Raleigh in Nottingham, and is evidently a bit of a bike collector.   He showed me a bike, which was custom built for a racer in the Tour de France in the 70's, but never used.  I swore I took a photo of the gorgeous lugs, and ridiculous low clearance between the tire and frame, but it seems to have disappeared from my memory card.

From Denver we headed up to Estes Park.  I didn't do a ton of biking there, although I did take my almost 4 year old nephew for a 3+ mile trip around Lake Estes.   He had a really tough time even going that far, and ultimately we had to call Grandpa for a lift.  I think kids bikes are heavy for their size, and without gearing, any hill becomes a challenge 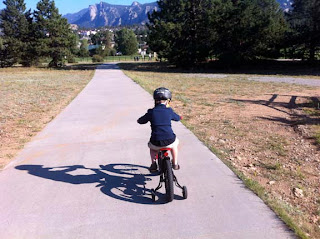 I rode my brother's beater mountain bike, a midlevel Trek from 10 years ago that he bought on craigslist.  Maybe I'm spoiled by having a bike that I have pretty well dialed in to my body,  but that was the most uncomfortable 3 miles that I've ridden in a while.   My undercarriage hurt,  my back hurt, my neck hurt.   I know that it wasn't perfectly adjusted, but I can imagine that most people buy a bike like this at a big bike shop,  and then they hate riding it, and it gathers cobwebs in the garage.


Coming back through Boulder, I dragged the Scientist into the downtown to check out the pedestrian mall and some of the bike infrastructure. 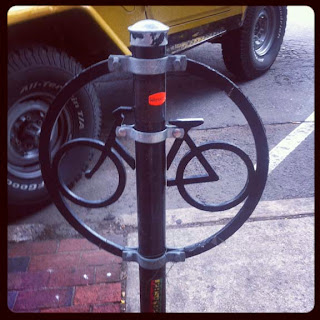 Even riding along the main highway through town, I noticed that there were raised pedestrian crossings at the right turn lanes, as a physical way of slowing down right turning drivers, and making them more likely to yield to pedestrians. 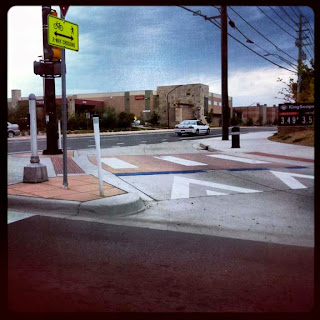 Parking around the Pearl Street pedestrian mall was pretty tough, and I commented to The Scientist that if we lived in Boulder, we would only come there by bike because it was so hard to drive and park there. 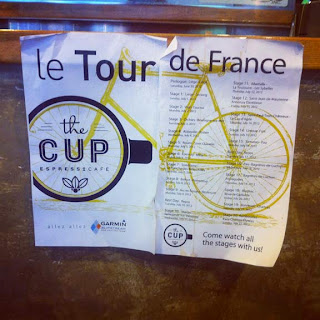 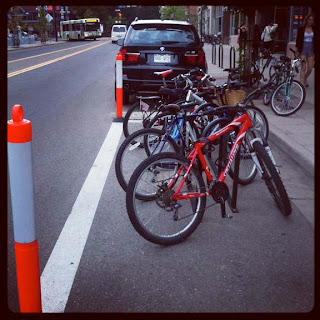 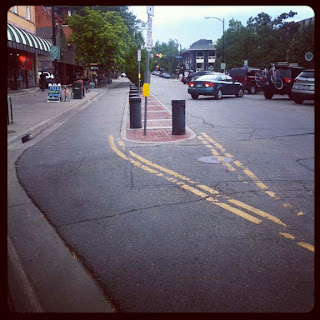 I was very impressed by the amount of infrastructure in Boulder.   Everywhere we went, there were lots of bike racks, which makes me think that they were required by the zoning or building code.  Lots of bike lanes, even on very busy streets, and some special infrastructure like buffered bike lanes, contraflow lanes, on-street bike corrals and neighborhood roundabouts. 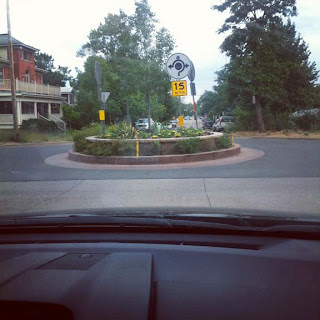 The thing that the Scientist noted was that there were not really any "city bikes"   There were a lot of mountain bikes, and a generous helping of BSO's.   There weren't many bikes with fenders- I suppose they don't really get much rain in Colorado generally.  In general though, there weren't any bikes that had much in the way of style,  especially in comparison to the amount of customization you see on transportation bikes in Boston.

I would be interested to find out how Boulder developed a bike culture.  Did advocates pressure the city into providing infrastructure?   Was there a visionary city planner, or a city council member or Mayor who was interested in transportation infrastructure.
I suspect that the politics of Boulder are not dissimilar to those of Cambridge, in terms of ecological consciousness, student population,  density etc.

I wonder how the process in Cambridge is similar and different from the process in Boulder, in Portland or in other places in the US that have been developing bike cultures.  Is the process in the US significantly different in Europe?   And what can be learned and applied to other cities?   I would be really interested in hearing from anyone out there who were involved in/ familiar with the creation of Boulder's bike culture.