Two of a kind

One of the things about having a robust bike culture in Boston is that you see all kinds of unusual bikes around town.

Last week biking home, I was behind a guy with a big black city bike.  But something about it seemed different from the average Raleigh that you see every day around here.   I pushed a bit to catch up with him, and just managed to catch him at a light.   By then I could tell it definitely was something unusual, and I asked him what kind of bike it was.   He responded that it was a Swiss Army bike.  And from right behind him I could see that it had some of the features of the 1944 Swiss Army bike I saw a year and a half ago. 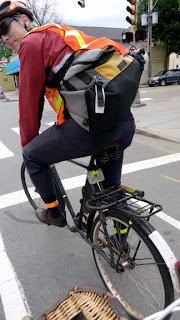 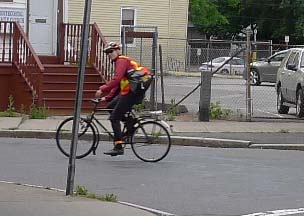 Since they're not very common bikes, I supposed that it might be the same bike, so I asked him if he'd bought it here, but he said that he had brought it from Switzerland himself.   Unfortunately the light changed, so we didn't get to have a longer conversation, but it was great to see yet another "One of a kind"  bike on the streets of Cambridge!  I hope that I see him again so that I can take more detailed photos.  (if you're interested in better photos, check out the earlier post).

Not two blocks later, I was stopped at a light when I was hailed by a guy on the sidewalk, commenting that he liked my bike.  He was unfolding what looked like a Strida- another cool bike that I don't see much around-although probably not as rare as a Swiss army bike :) 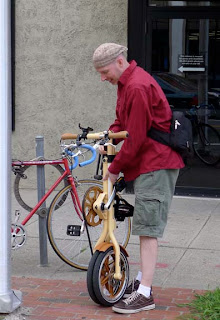