I've been falling behind on my canning this summer- mostly doing the odd batch of beans, as I deplete the pantry.  I made so much jam last summer and it felt like we weren't using up at the same pace, so I skipped both strawberry and blueberry season (although I suppose the last isn't completely done)  and missed sour cherry season because I was traveling.   So this leaves me peaches, raspberries and figs (although the figs aren't local, they're more of a fall season thing).

I decided I'd try to pick the raspberries myself, and to add some fun to the proceedings, that I'd bike out to the farm.   Thanks to the folks on the Chowhound Boston board, I got directed to Wright-Locke Farm in Winchester (just a few blocks from the Arlington line),  although they also warned me it was up a massive hill.

Partly because of the hill warning, but partly just because I thought it would be fun, I decided to take the Shogun,  which hasn't gotten ridden as much as I'd like because of a series of flat tires.   I wanted to pick a LOT of raspberries, so I wanted some serious carrying capacity, so I spent the morning installing a rack that I bought for it last winter.  I didn't want a huge dutch style rack like my city bikes have, just enough to fasten a small set of panniers.   The petite VO Constructeur rack seemed like the perfect choice.

The rack I have, had two holes already drilled in the end of the struts.  The idea was that you picked the set of holes that positioned the rack as close to the fender as possible, cutting off the extra length if you picked the higher set of holes.   I believe that they may have changed it since I bought this one, to have no holes so that you can adjust it exactly to the right height, because their online installation instructions start by having you drill your own holes. 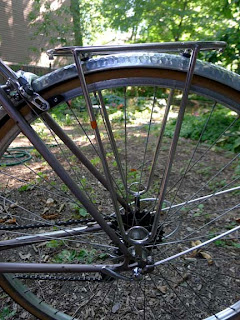 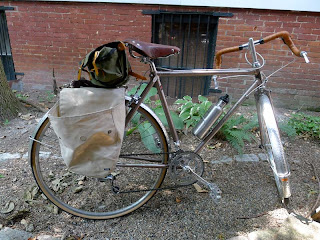 As it was, the rack sat about 3/16" too high above the fender, which was too close to drill a new hole really.  I suppose I could have turned the existing hole into a slot and pushed it down,  but instead I just used some rubber spacers between the top of the fender and the bottom of the rack.

The rack has bosses, into which you screw nuts up from under the fender.  This is slightly a pain, because you have to remove the wheel to get the screws in and up.  Not such a big deal to do once, but after the third round of adjustments, not so much fun.

Unfortunately the heads of the supplied machine screws were big allen key sockets, and the tire clearance on the fender wasn't enough for the head to clear the tire.  I tried it out on a quick trip to the compost drop off, and it caused a nasty whining noise. Short term, I cured the problem by partially deflating the tire, but that wasn't a permanent solution. 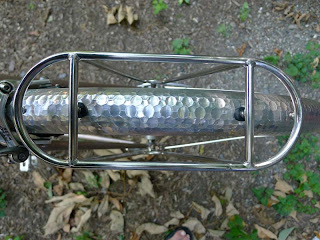 I detoured to the hardware store on the way home, picking up machine screws with a pan head, although they aren't stainless, so probably I'll redo it at some point.  Although since I don't anticipate riding this bike for long periods in rain, and it lives inside, maybe it won't be a problem.

Anyway, after too much time fussing with the rack, I was off, and I was a bit worried about time.   It was 2pm, and the field closed at 4pm, so I was running late.   I headed out Mass Ave, and instead of detouring to catch the bike path through Alewife, decided just to bike all the way out to Arlington center and pick up the path there.   The hill ended up not being so bad, although I did make use of the smaller chainring, it was perfectly manageable.

Got to the farm around 2:45, and started picking, but found that through a combination of it being early in the season and late in the picking day, the bushes were kind of picked over.   After over an hour of picking I had a bit more than a quart, but that was all I was going to get.  So much for needing both the panniers and the saddlebag! 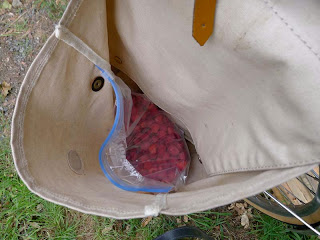 I headed back, taking the minuteman all the way, and running into Velouria on the way home.  She was glad to see the Shogun in use, I think, and wondered if having weight on the back made it handle strangely.  At that point there wasn't much weight on it, but there was later, and I didn't really notice any major issues.  It's supposed to be a "touring" frame I think, so you would hope that it could carry a decent load.  Velouria was headed out to Ride Studio cafe for the randonneuring "end of season" party, and invited me to come along.  Unfortunately by this point, I'd was pretty tired, and needed to let the dog out, so I just headed home,  stopping at Whole foods to buy a few more raspberries to supplement my sad PYO.  By the time I got home, I had managed to completely fill the saddlebags, and was glad I'd added the saddle bag as well.  My personal stuff (wallet, keys, camera, lock, extra water) went in the saddlebag, and everything else filled the panniers. 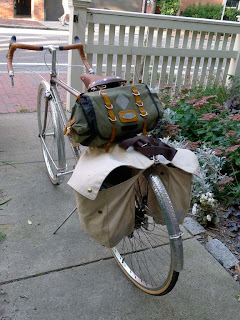 Raspberries have a lot of pectin, so I made cooked jam without anything added- 8c raspberries, 4 cups sugar, a squeeze of lemon and 15 minutes or so of a low boil.  I followed this recipe, although I think she's a bit cavalier about the processing, and did a full 10 minute boiling water canning processing. 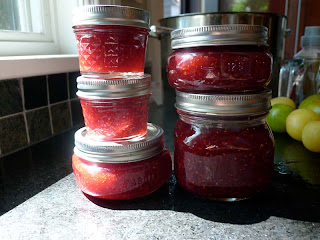 I am looking forward to enjoying them in the colder months on toast, or vanilla ice cream.