First impressions of the Bakfiets

I've ridden the new bakfiets for a couple of weeks now, and I want to start reporting on my experience riding it. I'm sure I'll have more insights as I put more miles on it but I have a few notes already on capacity, handling, security and public reaction.

The first ride I took it on, I went all out on an enormous grocery run.  Because of the snow we had in Feburary, I hadn't been riding much, and we were low on pretty much everything.   This is what my cart looked like: 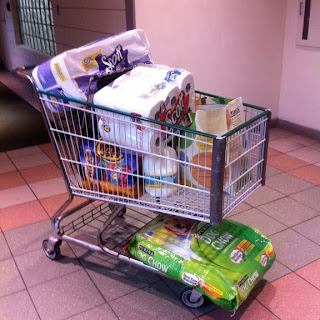 35 lb bag of dogfood, giant packages of both TP and paper towels, and just a lot of other stuff.  I was a little worried, but everything fit pretty well, although I couldn't keep the cover on because of the size of the big paper goods packages. 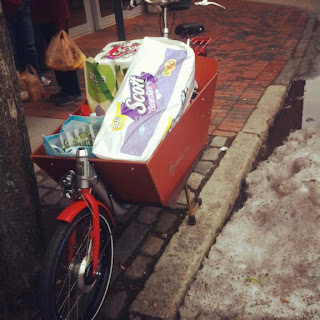 I then headed up over the mid- Cambridge hill to meet the Scientist at Dwell Time for coffee.  I will admit that there was a bit where I was in the lowest gear and had to stand briefly, but I made it.   A full load and a steep hill are a worst case scenario, but now I know I can do it, if only for short distances.
The next day I did a Home Depot/ Target run to Watertown, and comfortably fit in a 3' roll of hardware cloth, a folding stool and assorted toiletries and cleaning products.  Normally I'd then have to stop home to unload, but I rode on to trader Joe's,  where I picked up a half case of wine among other things.  No problems with the weight or the volume. It's like having an oversized bag it's easy to toss a few more things in it. 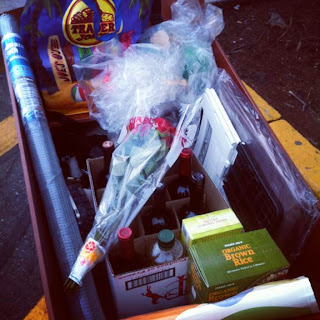 Handling.
It's a big bike and it's heavy.  No surprise there! However, it's geared appropriately, and I haven't had any problems going up hills. It actually accelerates surprising well, although the top speed isn't very high. I managed to catch the rider on the Onderwater tandem I posted about last week, but I was really really pushing, and it was a near thing.

In general it's much more stable than you would expect such a long thing to be.   I can actually ride comfortably at surprisingly low speeds.  I'm not going to start trackstanding at lights, but I can definitely inch up to them when I'm waiting for a light to turn but don't want to put a foot down.   Of course, putting a foot down is easy, thanks to the super low bottom bracket.
The tracking is very straight, I rode it comfortably one handed while eating an apple, and it felt very stable and not- twitchy. Turning while riding is not an appreciable issue, although turning it when I'm pushing it on a sidewalk is a bit tricky and I haven't gotten getting it through the front gate completely down yet.  The kickstand, as advertised is easy to operate and incredibly stable.   I'm getting the hang of positioning the bike near a pole so that it's in the right spot for the chain to reach when I pull it back onto the kickstand. 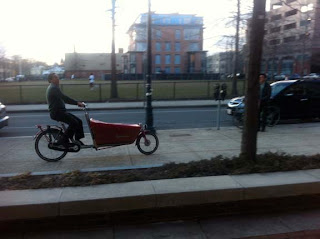 I took it to an advocacy committee meeting and everyone wanted to take a turn riding it, and even riding just 50 foot loops on the sidewalk, everyone was surprised at how stable it was, and seemed to be having a lot of fun.

Security,
One question a lot of people ask is "where do you lock a bakfiets".  In many cases, the answer is "wherever you feel like it,"  as in some ways it's self anchoring. The "cafe" lock or wheel lock feels fine for a short trip, especially when the bike is fully loaded- no one is going to pick it up and walk away with it. I'm getting pretty skilled at locking to a single post rack, but a multiple unit rack is a non-starter for obvious reasons.    I have an Abus city chain which I can use to chain the frame to a stationary object if one is convenient, and I would definitely use that if I were parking for more than 15 minutes, or in a location that didn't feel secure.
I've been using the box cover almost constantly because while it's not technically "secure"  I feel it's less likely that anyone will mess with what I have in the box if it's covered.  Plus it's been rainy/ snowy/ melty, and the cover keeps things dry, and in at least one case kept it bird dropping free!  I wouldn't leave my phone/ wallet keys in there, but with the cover, I'm not worried anyone is going to steal my library books or milk.

Public reaction.
So far public reaction has been overwhelmingly positive and I've had a lot of fun interactions.  It may be that after a year I'm tired of explaining it to everyone, but so far it's been a lot of fun.
On my maiden ride, while I sat in the cafe window drinking my coffee, I could watch a series of admirers stopping to take a long look.  Interestingly they were all 20's ish hipster guys, which I don't think of that being a primary demographic for a bike that's essentially a minivan.  That might have something to do with the Dwell Time demographic though.   At my next stop, the library a mother with two kids was very interested in the handling, having seen them in travels in Europe.  I had a guy at Porter square tell me at great length that he thought that they would be incredibly popular on the Cape and Islands where tourist traffic causes backups, and locals want a way to carry stuff without dealing with traffic jams.  Even the guys at the Cambridge Recycling Station were very interested, although they balked at the price.  The absolute best reaction though was from an adorable little girl in a bike seat, who said "Mom, it's a bakfiets!  I want a bakfiets!"  We just had a second to chat before the light changed, but not surprisingly they were Dutch.
Interestingly, I haven't noticed a big difference in driver behavior around me at all.  Perhaps because from behind, it's not that different from a regular bike.  You really do feel like you are taking up real estate on the road though.

This is just my reaction after a couple of weeks of riding.  Every Friday night I look forward to riding it all weekend, and I'm looking for excuses to ride it during the week.  If I had a better place to lock it at work I'd ride it into work just for the fun of it.  One thing I was realizing the other day is that I haven't had a brand new bike since I was in high school.  Even my "refurbished" bikes like Gilbert are  a hacked together system.   And the new bike does really work well- it's so smooth and nothing rattles or rubs or feels loose.  Even though I try to keep my old bikes maintained and tuned up, it's really nice to ride a brand new bike where everything just works without any fuss.  Here's hoping for many more miles of the same.