Yes, I am preparing a blog about m y first couple of rides with the bakfiets, but I have too much to say to do it quickly.  I promise I've been taking lots of pictures, and riding every weekend.  I was making my coffee on Thursday morning and thought to myself- only one more day, and then I can ride my bakfiets all weekend!

Today when I was finishing up my errands, I had a pleasantly surprising encounter.
I was riding along Memorial drive, waiting to cross Western Ave,  when suddenly, I saw a birhgt orange Workcycles Onderwater Tandem riding across my path on  Western Ave.   I rang my bell like crazy,  and the rider looked over at me, recognized that I was riding a bakfiets and smiled.
In the construction and confusion of that intersection I lost her for a moment, but when I was moving again I saw her ahead, and, pushing harder than I ever had on this bike (I may have even gotten out of the saddle) I managed to catch her just before our paths diverged. 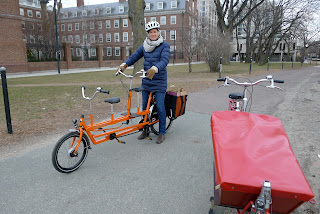 We chatted a bit about cargo bikes, kids bikes and self-importing bikes from the Netherlands.  I started to realize that she was the wife of Aaron Naparstek,  who I'd also run into because of bakfietsen.

It was great to see an Onderwater tandem in person- having only seen them online.  She said they had gotten it as their kids (6 and 8 years old) outgrew the bakfiets, and learned to pedal on their own.  In her opinion the bike handles great- better with the two kids on board, although at the time, she just had a double pannier's worth of groceries.
Her only regret was that both kids couldn't pedal at the same time,  as they're both old enough to pedal, but not quite old enough to ride independently on the street.  In many ways this seems like a heavier duty, dutchified version of the Bike Friday tandem I posted about here.  It's nice to have the kid in front though.

It was great to meet another cargo-biker-  I suspect most of us are kindred spirits in some way, and it's nice to have an easy way to identify each other as we travel through the city.