Since this is mainly a bicycle blog, I try to limit my food blogging to unusually delicious things.
When I saw this recipe in the NYT "Temporary Vegetarian" series I knew I had to try it,  partly because of all the umami goodness,  and partly because it was from a Cambridge based chef.  And having tried it, I needed to share it: 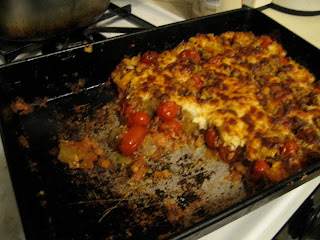 It was kind of a lot of work, partly because  a) I had to make my own breadcrumbs from a heel end of french bread that was lying around and b) I neglected to peel the eggplant before chopping it, and  then felt compelled to trim the peel off each perimeter cube.  Oops.
Otherwise it would go together smoothly and simply, and I bet it has the great freezing capability of a classic cassarole. I used regular store brand mozzarella, because honestly I can't imagine wasting good buffalo mozz. on anything except fantastic vine ripe tomatoes and a nice aged balsamic in a caprese.  I used dried herbs because I haven't started my herb garden for the year, and added 2 tsp of oregano.
I didn't have tomato puree, so I put a quart of (home canned) tomatoes in the food processor, and added 2 anchovies for extra oomph.    You could omit them if you're a strict vegetarian. Mine was also done after 30 min in the oven, but my oven runs hot.

Other yummy additions would include olives and capers, although that starts to take it out of the realm of what could plausibly be called "Eggplant Parmesean"

In any case it was delicious,  we both had 2nd helpings, and it will be put into heavy rotation once the eggplant start rolling in from the CSA.
Posted by cycler at 9:37 PM