In the Bike Week spirit of meeting fun bike people,  I was biking home Friday, and saw the gentleman who built the home brew cargo bike.  He was sitting in the park, eating dinner, and I barged in on him saying- "I've been looking for you!" 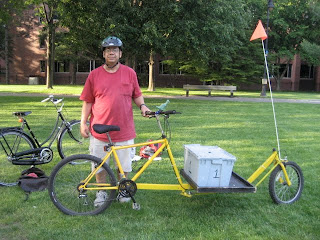 More formal introductions followed:  His name is Fred, and he's a AV installer who has a medical condition that doesn't allow him to drive.  Being a real tinkerer,  he started messing around with home-brew copies of the "long john" bakfiets that would allow him to carry the tools of his trade to wherever he needed to go.  He said he regularly carries 100 pounds, either as a grocery getter supreme,  or he says that he has a PA system (amp, car battery, speakers) that he runs on it.  Not surprisingly, he said that it is more stable with more weight

He wasn't actually familiar with the directions that I'd seen posted from a Portland OR fabricator,  but had developed a series of prototypes resulting in this bike.
He offered to let me take it for a spin, and after a bit of uncertainty on the first turn, I rode it around the park.  I wouldn't say I was super comfortable on it,  but it wasn't terribly awkward either- just different.  He took some photos of me going around the park: 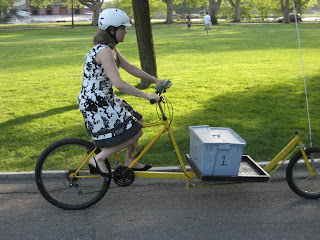 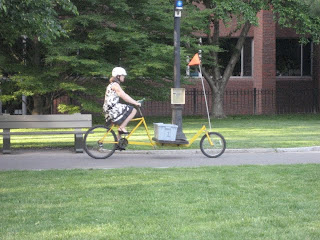 He's trying to start a bit of a business building them, and he says that he can build up a unit like this one, from salvaged bikes for about $1,500.

After I finished my test ride, another guy stopped, and enquired about it- he said that he'd been telling his wife they needed to get something like this (the dutch minivan).  Hanging out in the park could be a great sales strategy.  He said that people were really binary in their reactions- they either liked it or hated it,  and he said that people on really fancy bikes tended to hate it. 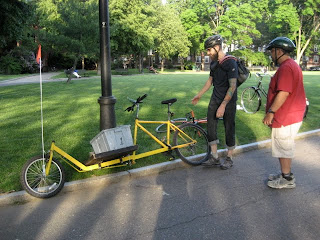 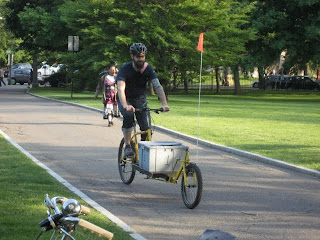 While $1,500 is nothing to sneeze at,  it's half the cost of the more polished dutch versions,  and it's local instead of being imported first from the netherlands to the west coast, and then back to the east coast, and made with recycled products.   I'd say that the build quality was really tight for a DIY,  but that if it were me, I'd like a couple of things:  generator lighting,  drum or disk brakes, kickstand, an IGH would be ideal,  and I'd like a more finished "box"    Some of these things (box/ cover) I could DIY,  and I'd probably try to get it powder coated for a slightly more finished appearance.  I think it's great that there's someone locally figuring things like this out, and trying to popularlize them.  If you're interested, he said he can be reached at fredsbikes@gmail.com
Posted by cycler at 11:03 AM