So Steve A commented recently that I see all kinds of weird bikes (and bike like objects) that he never sees.  While I'd like to put some of it down to the fact that I'm always looking for bikes, and have sharp eyes,   this is partly because I live in a college town and a lot of people bring bikes here from all over the world.

Cambridge also prides itself on being a bit, um, eccentric.  Non-conventional.  Ok, Weird.

I was biking away from my Gilbert photoshoot, and saw one of the strangest things I've seen involved with a bike,  which is really saying something.    This woman was riding towards me,  and I had to turn around, fumbling for my camera to try to get some snaps before she disappeared. 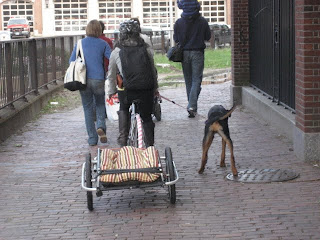 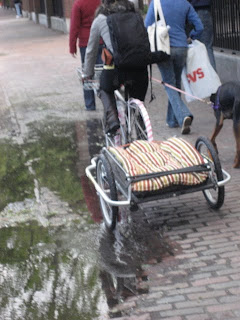 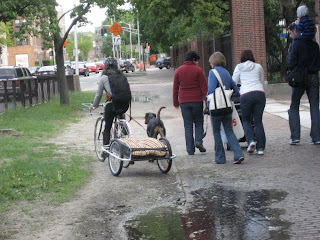 So I don't know with absolute certainty, because I didn't catch her, but I'm 99% certain that that's a mobile dog bed.  A trailer for her dog.
Not that this isn't actually a great thing for the dog.  My dog would love to come along on a lot of things that involve a ride too long for him to walk.  Two weeks ago when I took him to the  Arboretum for example ( he loves the lilacs!).
If I were really car free instead of just car-light, I would have had to find  a way to take him, and this would seem to be a good solution. Except for the fact that he wouldn't stay on the bed, but that's another story.  Only in Cambridge.
Posted by cycler at 8:02 PM