Victory from the Jaws of Defeat/Sunday Cruiser

It was a tough weekend.
We made a special trip Saturday down to a nursery 90 miles away only to find that the tree they thought had arrived had not arrived,  got a flat tire along the way and had a close brush with dangerously low oil pressure.  The good news is that we made it back on the dummy and still had time to go see a movie.

On Sunday the Scientist went on a bike ride with another scientist (they like to time themselves and go fast, so I stayed home and read the paper), then started to work on Minerva.
I'd taken off the 17T sprocket on Saturday and "returned" it to Cambridge Used Bicycles (they "traded" me at 19T for the 17T).  I put the new one on, and started to re-assemble the bike.  That's when things started to go wrong.  I had bought a chain at Harris "asking for a SRAM for a 3 speed" like the one I got for Gilbert.  Unfortunately they must have grabbed the wrong one,  and doubly unfortunately I didn't check it until I'd shortened it and tried to install it, only to realize it was the 3/32" chain used with derailleurs, not the 1/8" chain used on 3 speeds. Sigh. 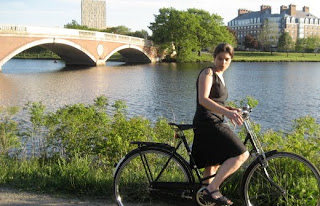 After some cursing, I took it off, put it back together, and returned it to Harris for an exchange.
I got back and spent the next 2-1/2 hours cursing at chains.  First I got the chain on at the perfect length.
But then I realized that a) the sprocket wasn't on tightly enough (needed an extra shim) and b) because the chain was so damn tight,  I couldn't get it off except by taking off the crank.  Chainbreakers are designed to be used on an "open" section of chain,  and all those parts of chain are concealed in the chain case, and since there was no slack, I couldn't get the link into the chainbreaker.  Cursing.

Then I put in an extra whole link ( two sections)  only to find that that chain was too long, and even with the axle pulled way back in the dropouts, it was noisy and loose.  More cursing, and the verge of tears. At every step of the way it seemed that I'd accidentally push a pin all the way through, or bend a link or something annoying.  Kudos to the Scientist for not only being a third hand,  but also talking me off the ledge more than once. 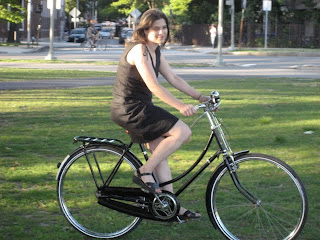 Finally I found the goldilocks solution- removing the two sections (one "link" ) I had just laboriously spliced in, and putting in a special "half link"  that the nice guy at Yellow Jersey had sent me when I was first having problems with the chainguard.  Success!  Not to loose, not too tight- and when I got it all up and running- it was like a dream-  quiet, smooth!  Hooray.  There would definitely have been tears if it hadn't worked after all that.  (Stopping and eating lunch would have done wonders for my mental health.) 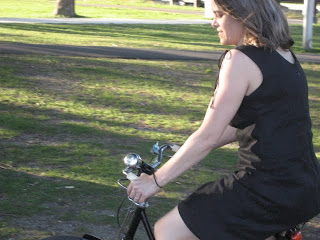 I took it out for a test spin to the grocery store and it's a fabulous ride- like a cruise ship- smooth, stately, stable. The 19T make it SO much easier to start from a stop, and much better up hills.  It's noticeably less peppy in 3rd, but that's OK, especially for this bike that I mainly want as a Sunday Cruiser.

After all that, I needed a margarita, so the Scientist and I bicycled into to Harvard Sq (yes, a whole 7 blocks) and had a bike date at our local approximation of a tex-mex restaurant, followed by coffees and a slow, one handed ride home. 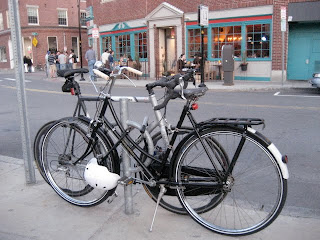 Odd-rackfellows- the Scientist's road bike and Minerva cuddling at the rack.  The Scientist made me carry his size 14 birkenstocks so that he could ride there in his cleats ?!?
A tough day, but I'm glad I did it-  I was worried a week ago that I'd have no bikes ready for bike week, and now I have two great rides!
Posted by cycler at 9:24 PM