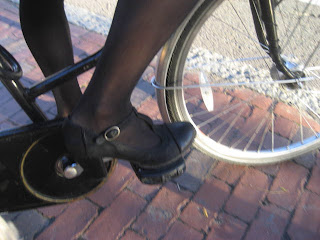 Somehow I wrenched my back a bit over a week ago, and that made the bursitis in my hip flare up.
I used to be a fairly serious runner, until halfway through training for my fourth marathon I went for a 13 mile run and couldn't walk the next day.  It makes me feel like I'm 80 to say "my bursitis is acting up"  but it was, and the best thing for it is not to walk much, take advil and wear flat shoes.
Now, a week later, I'm back in heels, and so far so good.

Interestingly I noticed that in flats or clogs, my pedaling form is not as good- my feet tend to slide forward so that my arch is over the pedal instead of the toe.  When I'm wearing heels, that would be really weird and uncomfortable, so my form is better sort of by default.
I know that a lot of people have problems with their leather soled shoes slipping on the pedals.
I haven't really had much of a problem with it- it's not that it doesn't happen, I guess I just don't really notice it that much.  These newish shoes which are my new- go to work standbys,  actually have a funky little rubber patch at the whole front of the shoe.  I don't love how it looks, but they're great for biking.
My blinking pedals, which I love, have little dull studs in the top, and a funky uneven bottom where the generator is.  They're supposed to be weighted to always hang "upright"  but often I find that I'm pedaling on them upside down, without a real problem.  I'll have to get some action shots with them lit, because they're really surprisingly bright.  LED's are so incredible.