What seems like a long time ago now, I spotted a cute couple riding along together,  and eyed them curiously as they parked outside the business I was inside.  They went into another store, and I took the opportunity to admire their bikes. 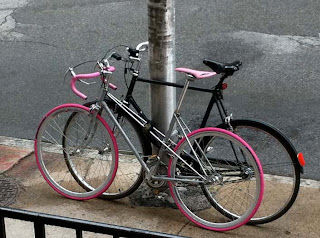 The mixtie has fixie styling (V rims, electric color scheme) but gears and brakes.  I don't remember the  brake manufacturer but at the time I noticed that it was nothing that I'd seen before was a germanic name,  and both bikes had the same brand of brakes.  Somehow the pink seems less shocking with the gray frame than it would with a white frame I think.  It's playful instead of saccharine. 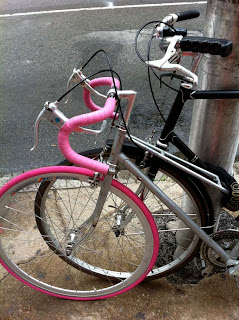 The black bike had a really unusual coating- matte black and a little bit bumpy,  with a nice shiny asymmetric silver pinstripe, and silver-outlined lugs. 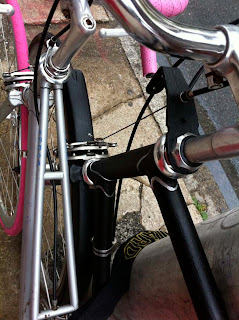 While I was admiring it, the owners came back out and "caught me" which is always a bit embarrassing, but meant that I got a chance to ask the owner what the coating was on the black bike,  and it turns out it's spray on bedliner, designed to protect truck beds from scratching and rusting. 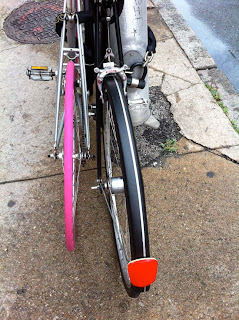 He said that he had already painted the bike once, and that it didn't hold up.  Then he did research into powdercoating it (at Geekhouse) and decided it was more money than he wanted to spend.  He did the coating himself, and it sounded like it had been pretty simple and straightforward.  It's a marvelous texture, and should be a practical and long lasting one.