Through several accidents of fate, I found myself bikeless several days last week, so I decided it was a good time to try out the Hubway bikes.   In their initial weekend, I saw several groups of them in Harvard square- which was particularly interesting, given that there aren't any Cambridge stations yet.  I decided a  to get an annual membership, taking advantage of the $60 teaser rate  (goes to $85 at some point). Partly I think it's a good cause, but I also think it will be useful if I'm bikeless,  have a guest without a bike, or just don't feel like taking my bike down the elevator to run an errand at lunch.

Since there aren't any Cambridge stations yet, I walked to Harvard square,  and took the T into South Station.   Once there I fumbled around trying to find the kisok (I came up on the wrong side of a massive intersection and had to navigate it first on foot and then with a bike). 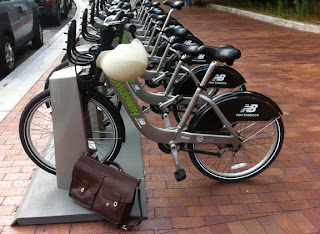 There were plenty of bikes,  as promised by the handy-so-far application "spotcycle"  and checking one out took only a moment.  If you have an annual membership, they mail you a hard "key" (about like a thumb drive)  which you insert into the dock, wait a second for the green light, and then pull. 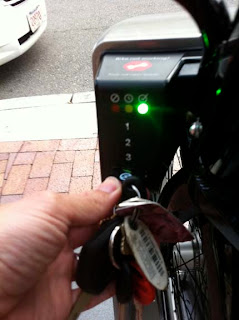 Unfortunately I had a giant package with me,  one that would actually have been a bit tricky on Gilbert-  bulky, and somewhat crushable.  It was in a giant plastic bag with handles, and I resolved to just carry it in my hand, or looped over the handlebars.  I strapped on the helmet I had brought from home, and started to take off.

Unfortunately I had neglected to adjust the seat,  and immediately had to pull off to raise, and straighten it.  I found that this was a problem each time I rode the bikes this week- it's just not something you ever think to check when you hop on your own bike! 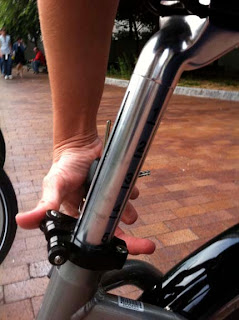 Starting off again, I rode a couple of blocks along the "shoulder"  of Atlantic Ave.   When I normally ride on this road, I am pretty aggressive and take one of the 3 lanes each way.  However, burdened as I was with an unwieldy package, on an unfamiliar bike, in heavy rush hour traffic, I soon decided that this was not possible.  I pulled up on the sidewalk, crossed at the crosswalk, and rode the rest of the 8 blocks or so on the greenway sidewalks, in technical violation of the greenway rules, but behaving courteously to the few pedestrians I encountered.

A three minute ride later, I pulled up to a docking station at Rowes wharf,  immediately across the greenway from my office- a successful first ride!

My ride home that evening was very smooth, mostly because I no longer had a big package, so I could concentrate more on the bike itself.   It's no heavier than Gilbert, but it's geared much lower,  so it's hard to go very fast,  which would be a problem for vehicular cycling.   The front rack with bungee cord was useful, but with a heavy bag on the front, handling was not ideal.

There are nicely integrated "be seen" lights on the front and back, driven by a generator hub.   I think that they're "senso" style, coming on only in darker conditions, but I didn't really test it. 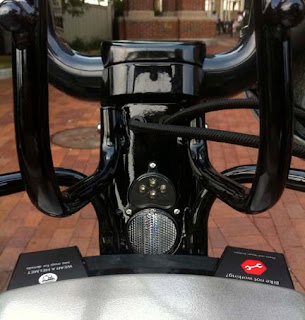 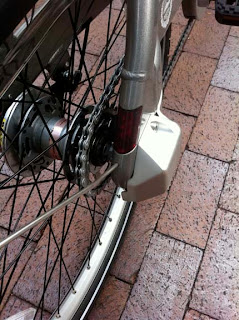 The construction is not exactly a thing of beauty (avert your eyes Velouria)  but they seemed like sturdy and reasonably comfortable city bikes. 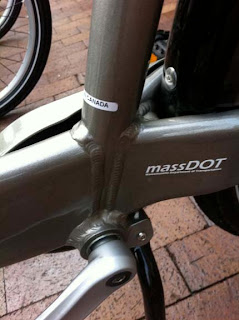 Ugly welds aside, I think that it's a better bike than the one I rented in NYC last summer when the Scientist and I went to visit.

I rode it one other day, and to a meeting that I attended during the middle of a day.   I found that I had a choice of convenient stations near both my starting point and my destination.  Interestingly another of the attendees,   David Watson from Massbike also rode one.  I don't know if he's just trying it out and promoting it, or if he was bikeless that dat too?

Several people in my office seemed potentially interested in joining.   They take commuter rail in from the suburbs, and then have a 10-20 minute walk from the terminal station to our office- a trip that would be made much faster on a bike.  I also heard a lot of people talking about it as I rode by, and I think that every time I was checking in or out, there was someone looking at the setup, or asking me questions about the system. Maybe I'm just looking for it, but it felt like I saw a lot of people on the train with bike helmets in hand,  and I've seen a lot of them around, so I'm hopeful that it's taking off (or is at least an interesting novelty)

The whole experience made me so angry that the state didn't build any sort of bicycle facilities in the big dig "greenway" project.  No on street bike lanes,  no MUP on the greenway, nothing.   I feel relatively comfortable biking there as an advanced cyclist,  but there's no way that my Aunt and Uncle visiting from Des Moines are going to hop on a three lane each way arterial, full of trucks and tour busses,  which in several places is the on and off ramp to a freeway.    They had all the room in the world, and it's criminal that there was no thought at all for bicycle traffic.     I know that Nicole Freeman has said that they're "working on"  developing something there,  and I hope it's soon, because I think that it would be critical to solving the "last mile" transportation problems of the North station- South Station connection.
Posted by cycler at 9:36 PM