I've been meaning to contact the city of Boston for what seems like forever to get them to fix the giant pothole in the middle lane of Cambridge street where it comes into Charles Circle.  It's in the part of the lane that I'm riding in to go straight over the bridge. It's a particularly nasty pothole: deep slits parallel to a metal grating, lurking in hopes of catching a tire and throwing a rider over the bars.

Or at least it was, as I finally remembered to file a report using the citizen's connect App on Monday, and it was fixed by Tuesday end of day!  Citizen's Connect For The Win! 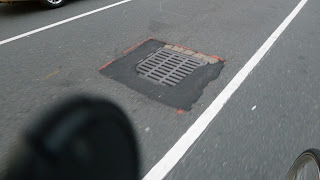 It doesn't look like a fabulous, long lasting patch, but it will do for now, and it's one less thing to worry about in a stressful intersection.   Now if we could just get the city to stop people turning right from the left lane there, I'd have no complaints at all.
Posted by cycler at 12:15 PM