As followers of my twitter/ instragram feed may have noticed, I was in Dallas last weekend, visiting the Scientist's side of the family for a quick trip.
I have to say I spent a lot of time in the car, as one might expect from such a car-centric city.
However, one evening we did visit the more bike-friendly area of "Oak Cliff"

My sister in law has been wanting a Linus for a long time, and until now, they've never had the one she wanted in stock.  Of course they had it on this trip, but she's 8 1/2 months pregnant and didn't feel comfortable doing a test ride.   Hopefully she can go by after the baby is born and they will still have it/ have another one.

I didn't get to chat as long as I'd like to with the people at the shop, but they seemed very nice.   They had an amazing vintage (US production) Trek, which they'd fitted out with a serious touring rack, an Edeluxe dynamo light and hammered honjo fenders.  The amazing thing was that they'd had the frame nickel plated- which was just stunning. 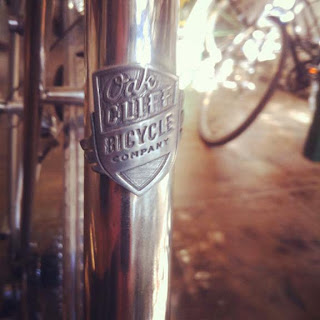 I only realized after I'd left that I didn't get a picture of the whole bike, just the custom badge  that they'd attached to the seat tube.  We were late for dinner, and although we hoped we'd get back during my trip we didn't make it.

I saw lots of bike parking and signs of bike culture in the neighborhood though.

One really cool thing was this row of wall-mounted bike hangers along the alley side of a popular restaurant:


There were also regular sidewalk racks: 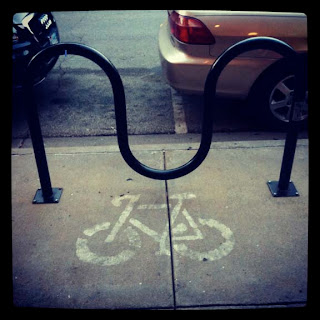 Bikes used as displays for a fancy florist: 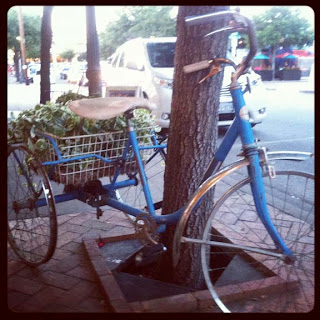 And a whole bay of parking blocked off for bikes.  Too bad it had super lousy wheelbender racks! 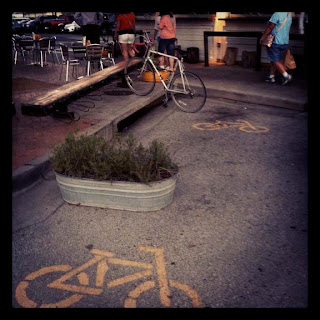 Hopefully I'll get another chance to drop by on a future trip to talk to the people who run the shop, get my S-i-l  her bike, and ride around a bit on my own!