It's that time of year again, CSA pickups have begun!  I really like having it so close to my office- I just run down and pick it up during my lunch hour.  The process has been made much easier by the new-ish (late last year)  bike lanes on Atlantic Ave both ways.   I used to take the lane without too much guilt, since there are two lanes, but it IS much more comfortable to have my own space on the road.
Lots and lots and lots of greens this time of year!  I've been trying to eat more salads, so this is not entirely unwelcome, but it's still a lot of lettuce.   We got (tuscan) kale last week, which I immediately turned into my favorite salad!

Surprisingly, we also got 2Lbs of Zucchini/ summer squash,  which I think of as a later summer crop.  Faced with so much zucchini before I was really ready for it,  and especially given that it was kind of cold this week, I turned it into a batch of this soup.  I used plain goat cheese instead of the Boursin,  because I had one and not the other, and it was good, although I had garlic breath for 36 hours after.

One of my favorite temptations at the farmer's market where I pick up my CSA is the Swiss Bakers stand.  I have a hard time resisting their pretzels, which come in roll, rod and traditional pretzel forms. 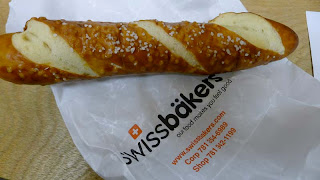 I believe that they now have a retail cafe'/ bakery in Brighton, need to make a trip out there to check it out.

As always during the early weeks, I cling to the fiction that I can eat everything before the next week's bounty arrives.   It never quite works out, but it's a good incentive to eat a lot of veggies and center my meal planning on what's actually in the fridge, as opposed to whatever grabs my fancy on the way home.