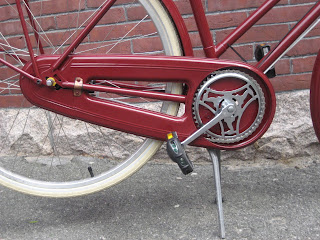 After a lot of deliberation over the last year or more, I decided to give Gilbert a "Heron-ectomy", and change over to a modern drive-train.  Although the distinctive "heron" pattern of the classic Raleigh chainring is very charming,  I felt that the left crank, or possibly the actual axle was somehow damaged or bent, and something was causing me to wear through pedals on the left side at an unacceptable rate.  Even though Pedalite has been amazingly generous in their replacement policy, there were other reasons to make the switch.  The cotters were a hassle any time I needed to get them off, and given that the theory was to have the chain-ring hidden in the chaincase to properly seal the chain away from the weather, I decided that it was time to upgrade to a "modern" bottom bracket and crankset.  Ultimately I have three other bicycles with exposed Raleigh heron chain-rings, and I thought that for my everyday bicycle function was more important than charm.

The weird Raleigh 26tpi  bottom bracket threading used to be the hard part in updating Raleigh drivetrains.  But now Velo Orange (among others) make replacement shells that friction fit into any threading BB shell, even the notoriously weird Raleigh 26 TPI thread ones.
The really hard part is finding a chainring without a raised "spider"  that will interfere with the chaincase, and which has enough clearance between the crank and the chainring to allow the pie plate part of the chaincase to fit.

This is a pretty complicated procedure, with a lot of twiddly bits and knowing exactly what to order, so I didn't feel comfortable doing it myself.   So I handed the bike over to Emily at Hub bicycles.  It took her a couple of tries to find the right chainring, and after ordering a couple of things, she settled on the Origin-8 Classic Sport Single

She did a couple of other routine maintenance tasks, but one thing that she couldn't manage to do was to put the chaincase "pie plate" back on.   I can't find an official name for this piece, but it's nothing to do with the "pie plate" spoke shield that keeps a chain from going into the spokes of a rear wheel.  I'm talking about the plate which allows access to the chainring and BB without removing the chaincase.

Somehow the chaincase, which is made of pretty thin metal, had distorted and the plate just wouldn't stay popped in. Typically the plate,  which has a little raised rim kind of like a top hat, is held in by friction with the hole in the chaincase, which has a rolled edge to make it "thicker"  and provide more contact. I had been having problems with it before the overhaul, and had it kind of wedged in with some sticky putty-type adhesive, and knew I was going to have to really solve the problem at some point if I wanted to keep the chaincase really enclosed.

After thinking about magnets, and various semi-permanent adhesives, I finally decided to go with mechanical fasteners. What would have been the easiest thing would be to find something that's called a "bung" which is a little threaded thing with a flange on it, which is designed to bolt things onto thin sheet metal. The flange is glued or welded to the sheet metal with the threaded piece sticking through the hole.  However, I couldn't find a bung online any smaller than 1/4" diameter, which was way too big for the flange.
I ended up using a 2mm bolt and nut.  The tough part was to fasten a nut inside the chain-case so that it would remain fixed and not turn so that I could turn the bolt and snug it up.  This ended up taking several very delicate attempts.   I put glue on the nut, and then eased it in place with a pair of tweezers, and then glommed hot glue on it to keep it in place while the glue dried.  With a tiny nut and an awkward angle it felt a bit like playing "Operation" without actually being able to see the tips of the tweezers, as they disappeared around the edge of the chaincase. I first used "liquid nails"  mostly because it had enough viscosity to hold the nut in place, but it didn't adhere to the painted metal very well.   I ended up using JB weld,  after cleaning the inside of the case well with xylene to degrease it, and coating the threads with grease to make sure that the JB weld didn't muck up the threads of the nut.

Once the adhesive had cured for 24 hours, I liberally coated the screw threads with Locktite,  and carefully screwed the plate in,  and counted myself lucky that the nuts held in place. 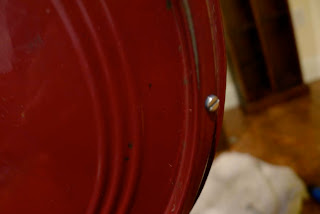 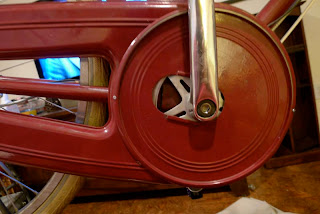 So far it's worked pretty well.   I don't know if the adhesive will withstand the torque if I ever have to remove the plate and re-attach it- I felt like it was always a bit tenuous. It will be fine now that it's tightened down though.  I think that if I have to do it again, I will remove the entire chaincase (easier now with the modern set up)  and perhaps try to solder or otherwise fasten the nuts in more permanently.  Hopefully that doesn't arise for a good long time.  I also need to find the little closure plate that slides into the slots and covers the remaining slot.  I know it's around somewhere and will turn up sooner or later.