Thinking inside the Baks

As anyone who's read this blog much knows, I run almost all of the Cycler-Scientist household errands by bicycle.  Groceries, CSA pickups, Household tools,building materials, landscape supplies, boxes to be mailed, library books, compost, exercise equipment, toy wheelbarrows, takeout food, Christmas trees:  there isn't much I haven't at least thought about carrying by bike.  I was talking to my friend Cris, about how I draw the line at the propane tank for the grill.  The consequences of a full tank of propane falling off the rack and bouncing on the street seemed pretty terrifying.

But now, I'll be able to carry the propane tank too!  As those watching my twitter feed may have guessed, I received a two very large boxes last week containing a Workcycles Cargobike Long aka "bakfiets."
The bike is a present from the Scientist for a "Birthday of Significance" last fall.   He actually had a plan to buy a Bakfiets.nl bike when he was in Munich right before said birthday,  but when he arrived at the dealer there, they'd sold out.  We test rode one at Adeline Adeline, but shipping it from NYC seemed almost as much trouble as shipping one from Europe.  Plus the Scientist was going to Amsterdam in January, and we thought he could just pick it up while he was there, and self-import it as "luggage."  The German and Dutch postdocs in his lab were so excited and helped him do a lot of research on the subject.

So we started talking to Henry Cutler at Workcycles, and thought we'd basically figured it out, and then sort of forgot about it until mid-December.  Then we got bogged down in the logistics of one person taking a couple of giant boxes on the plane,  and by the time we figured that all out, Henry had sold out of his stock.   Those Bakfietsen, selling like hotcakes!  Unfortunately the Bakfiets.nl factory,  where the Workcycles cargo bikes are built (with slightly tweaked specifications) was going to be closed for the holidays until the day after the Scientist was coming back to the US.   After looking at the logistics, we decided to have it shipped via UPS from Amsterdam.

But why a bakfiets?   I first rode a bakfiets about 6 years ago in Portland OR, at Clever Cycles.  Maybe it's because of my crazy cargo-carrying tendencies (see first paragraph above), but I thought they were so cool, and ever since,  they turn my head like no other bike.   I know that there are a lot of arguments for long tail bikes, and now that step-through long and mid-tails are available, they might work for me.  However, I like the option of carrying really bulky stuff (like said propane tank)  or cargo that I need to keep an eye on in front in a big box.   For example, I'd like to be able to rig a harness that will let me take the small brown dog with me on nice days while I run my errands.  I probably won't ride it much to work (although I may ride on CSA pickup days),  but will probably ride it most weekend days.  My days of organizing my errands in circles to dump things and pick things up at the house may truly be over.

Also, for me, the bakfiets has a romance that I don't feel from the longtails.  I'm suppose I'm kind of drawn to the idea of being a poster-bike for car-free life when I'm riding around.  It's been hypothesized that cargo bikes are the "new indicator species"  in places like Boston where we are starting to have a serious bike culture.  A cargo bike says "I live my life with a bike, not a car, and I need a bike that will make that possible."  And I won't be the only one-I know a couple of families locally that have them, and though I wouldn't say they're common, they're increasingly visible.  For example, just after I met the UPS driver to get the box, just as I stepped out of my door to head to work, a Bakfiets went by, ridden by a young man who looked like a bike messenger,  with a box filled to the top with stuff.

There are two unfortunate things- Firstly, although Workcycles spent a lot of time wrapping each part of the frame in foam, evidently the customs inspector took a lot of those wrappings off (to check for contraband???)  and that, combined with a rather large hole in the box resulted in some gouges in the seat tube paint. 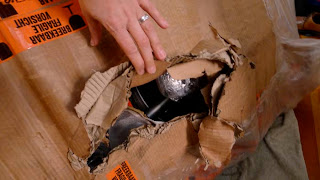 Further unwrapping revealed that the box had been crushed badly enough to bend the 1/4" steel plate where the steering linkage attaches to the fork,  and the front fender had been badly dented and the paint cracked.  I am waiting to meet with UPS for them to "inspect the packaging" as part of a claim.  Not sure if we can get touchup paint yet, or if we need to replace the fork to properly attach the linkage. 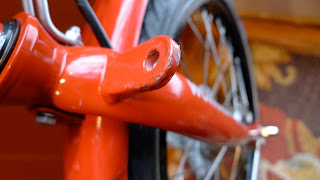 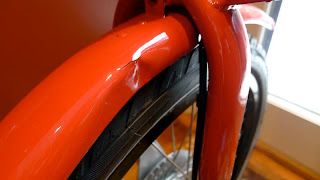 Secondly, and even more upsettingly, I probably won't be able to test ride it for another week or so.  Partly because of the UPS damage claim, we haven't assembled it yet.  The Scientist is going to be out of town later this week,  and I can't assemble it without his help, let alone get it out the door.   Even if I could, it would be terribly rude to enjoy my first ride on his thoughtful present without him there to watch. Maybe by the time it's all together for a test ride the snow will be at least slightly melted!   I'm honestly not sure how we'd get it out the front gate right now, as there's a 4' snowbank about 3' away from the gate.
So in the meantime it's sitting in my dining room taunting me!  The good news is that I absolutely love the color.  I was a tiny bit worried as "matte silver" could cover a lot of ground, but it's a nice dark silver- something J Crew would call "Titanium" The red fenders and black chain-case are a great contrast too.  The frame alone looks enormous sitting in our dining room, and I keep nervously looking at photos of them with people for scale, and trying to assure myself that it will be the right size. 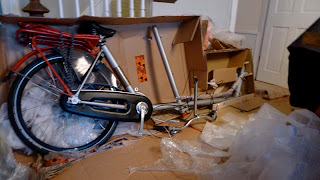 A test ride and more photos will have to wait.  But I'm sure there will be lots and lots of photos of Portage P0rn featuring the new bike in the future- so stay tuned!