How I stopped worrying and learned to love the Kale

I'll have to admit that until recently Kale and Kolrhabi were in a close race in the "vegetable least likely to succeed" competition in our CSA bags. Yeah yeah, I know it's good for me, but still.... We tried blanching it, then sauteeing it with garlic and olive oil: meh.  Tried cooking it with Indian spices and chickpeas,  kinda chewy, not that exciting.  I'll admit that a lot of it went to waste- to the point that sometimes I just didn't take my allotted bunch at the CSA stand.

But I've seen the light,  and it's yummy, and I want everyone else to know, that you too friend can enjoy Kale!  The answer is KALE SALAD.

But wait, you say,  isn't Kale tough and chewy, and don't you have to boil it into masticatable submission?
The secret is to get the right kind of kale.  Eschew the curly stuff that looks like it belongs along the edges of a sad buffet line, and look for the dark dark green,  narrow leaved, pebbly textured "Tuscan Kale"  (aka Cavalo Nero, or Dinosaur Kale). 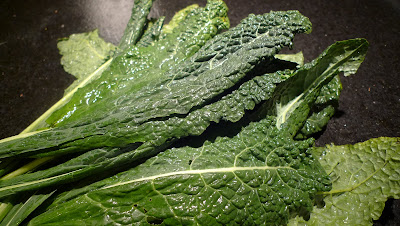 You want to create very narrow strips (almost a chiffonade),  which is easily accomplished by rolling the leaves and slicing into 1/4" wide strips.  I wouldn't use the parts that are stem only, but you don't need to remove the entire rib.
Make a lemony garlic dressing- juice of one lemon,  2x that volume olive oil,  1 large clove garlic, pepper and salt, whisked together until emulsified.  Let the dressed kale sit for at least 10 minutes before serving -the lemon juice will help tenderize the fibers.
While the salad sits, make croutons.  Tear stale bread into smallish chunks (1/2" or so),  Heat a bit of olive oil or butter in a heavy skillet,  add the bread and toss to coat with fat,  stirring occasionally until toasty brown (or place in a low oven for half an hour).

Toss in the breadcrumbs, a lot of pecorino cheese (1 cup grated fine to one normal bunch of kale), and enjoy! 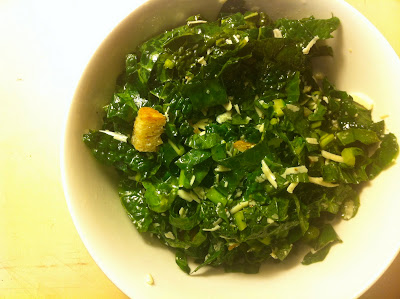 Honestly,  this was so good the first time that I made it that I had seconds for dessert.   And when there was no kale in last week's CSA, I actually bought some at the farmer's market.  I made it for our July 4th party, and everyone was skeptical, but we actually finished most of a giant double batch,  and I even saw people getting second helpings, which has not happened with any other dish I've made with Kale  Yes, it was that good!

And unlike most salads that are lousy the next day, this one is still good (a bit less crisp) as leftovers.  YUM.
Posted by cycler at 2:32 PM