My office had a "summer" outing last week,  and at one point we all had to get from the Financial district to Back Bay.   Most people took the T, but an intrepid group (including my bosses)  decided to take Hubway.

It worked great for a pair of short trips that were asymmetrical.  We left from the Milk/ India station,  road around the common and down the left side lanes on Commonwealth, dropped off at the Boylston/ Mass Ave station, and went bowling. 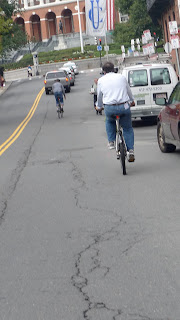 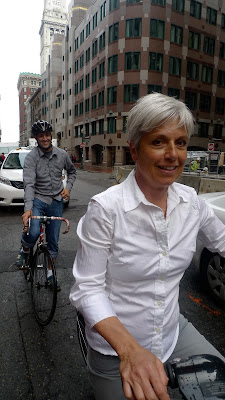 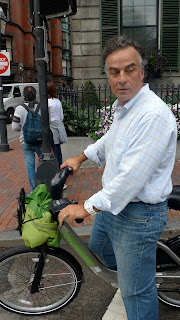 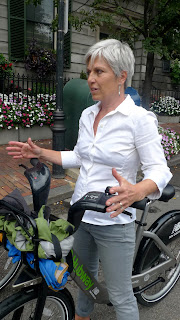 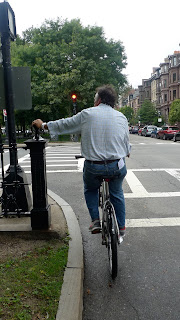 Afterwards, we picked up at the Newbury/ Hereford station and rode to the Seaport Blvd stop.  I really don't understand why it's on Seaport, which I don't find particularly bike- friendly, as opposed to on Northern Ave, which is so much lower traffic, and closer to the ICA, Fan Pier and the Courthouse.

We ate at Legal's Harborside, which has a fantastic view.  That area is really starting to hop in the evenings, which is great.  I'm impressed at the balance they've struck between suburban sized big sidewalks, retail spaces and parking lots and human scaled, walkable development.   It helps that each business didn't have to provide on-site parking, under the theory that people could park in the oceans of lots between the new stuff and downtown (or ride the T, or bike).  The result is a pretty dense nugget of restaurants and offices (not much retail yet) that draws a ton of people, especially at night.
Posted by cycler at 1:36 PM