Fixing it so it brakes, part 2

Back in May, I posted about replacing Minerva's  brake shoes with the fabulous new Koolstop rod brake pads.  I thought I would have a quick follow up about the final tweaks to the conversion of the front brake to a hub brake system.

Alas,  technical difficulties and life got in the way.  The technical difficulty was that I took the wheel off to take it to be trued, and somehow lost one of the axle nuts in the process.  No big deal except this hub seems to have really weird and atypical threading.  Harris ordered me a new one,  but then that one didn't quite work either. 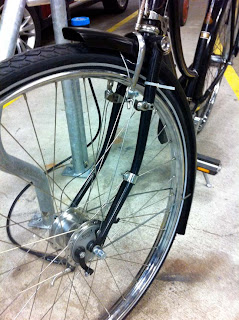 This was OK,  except it was really hard to adjust- you had to tension the cable just to the point of activating the brake, and then screw it down, and you really needed three hands to do it right.  I was contemplating a turnbuckle,  when a reader offered me a N.O.S.  Rod- drum conversion kit that he had ordered for a project that ultimately he didn't complete.   I didn't realize at the time how rare these are, so I feel very fortunate to have "happened" on one. 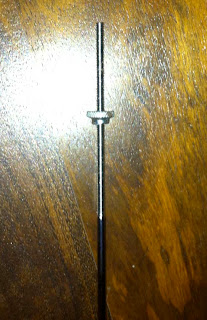 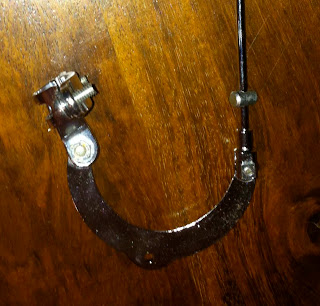 A replacement "stirrup"  which attaches onto the drive side fork with a pivot, and has a rod that heads down to the hub,  with a threaded end and a dongle which engages in the rod brake arm.
The only problem was that the angle of the fork made it such that when the reaction arm was clamped to the fork (using the part that was designed for that), the angle of the activation arm caused the rod to hit the axle. 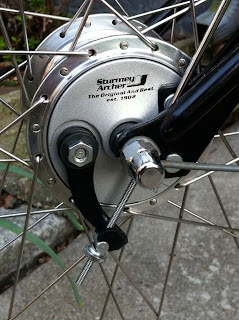 Rotating the reaction arm clockwise allowed the rod to travel in a straight line without hitting the axle, but make attachment to the fork troublesome. 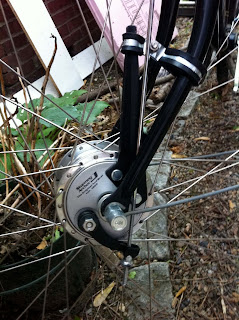 And in any case the fork blade was so close to the axle body, that it seemed that the rod was binding and not moving smoothly.   I added some washers between the axle and the fork, which solved that problem,  but the replacement nut wouldn't tighten down enough to hold the wheel in place. 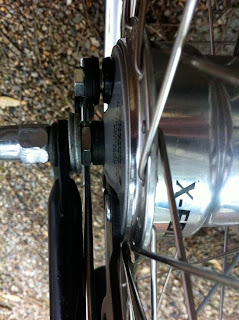 Finally, I bit the bullet and drilled a hole though the reaction arm of the hub such that I could attach it to the fork at an angle that would allow the rod to just miss the axle.  This allowed me to use the piece that came with the hub for this purpose, although not exactly as it was designed.  The arm was supposed to fit in a little notch on the clamp,  but instead I used it as a glorified P clamp.
All this was enough to get the brake working, and well enough (and easily adjusted enough) that after a quick spin around the block, I felt up to riding 14 miles (RT) to Harris Cyclery and back to pick up some brake pads.  I could have probably found them closer, but wanted to also stop by Russo's market.  The trip was uneventful (although I packed a lot of tools just in case),  but super sticky. 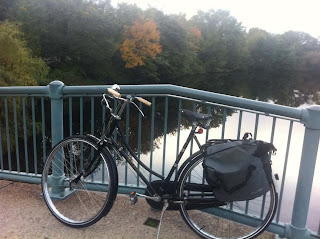 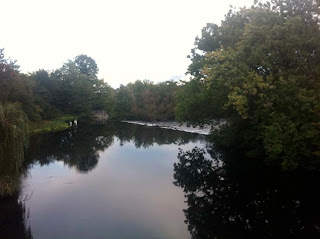 I stopped briefly on a bridge over the Charles to enjoy the view.  It was so humid that you could see the air!   After a long hot day of errands and bike messing, I was glad to take a cool shower and relax in the AC.
I still haven't resolved the axle issues.  The good news is that I found the original axle nut  a couple of weeks ago between the seats of the Scientist's car,  the bad news is that I don't remember where I put it when I found it.   The wheel is being held in mostly by gravity,  which is not a good long term plan.  My hope is that I can find the correct nut,  screw everything down properly and have a roadster bike with its lovely slack geometry but with all weather reliability and lighting.  It's been a long slow road, but I think the end is in sight!
Posted by cycler at 11:17 PM