These have been in for a while,  but Somerville has finally brought "on street" bike parking to the Boston area- fitting 9 bikes into the space of one car:
I also noted several bike racks around Davis Sq.  that were rings fastened to poles that already happened to be stuck in the ground.   On one hand, locking to the pole might have been just as easy as locking to the ring,  and there are questions about how secure the rings are.  Cambridge phased out this kind of bolt-on ring, after they started to fail or be compromised in some cases. In theory you use tamper-proof fasteners and it should be pretty secure I would think.

As automated multi-space meters are taking over parking areas, however,  it seems like developing a protocol for turning abandoned meter poles into bike racks is a worthy project. 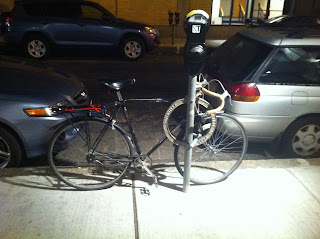 Once the meter head is taken off, you lose that pole as a parking spot,  but few cities want to spend the extra money to remove the meter pole and install a new pole  which is part of a dedicated bike rack.  One other solution I have seen is to leave the meter head on, but remove the core-  so you can't lift the bike off the top, but it's supposedly obvious that the meter doesn't work any more.
Posted by cycler at 1:17 PM