I spent some time this weekend doing some little projects that have been on the "to do" list for way too long,  most of which involved adding visibility to my daily riding gear.

Something that I liked about my Bern helmet was the rear  plastic clip (designed for goggle retention on the ski slopes).  Most days I slipped a Planet Bike Superflash into the clip (sideways) to add an extra 3' of height to my bike light assembly.

In order to mount it on the Yakkay, I needed a loop of some sort.  I originally thought I'd put a shock cord sort of loop, and mount the light vertically instead of horizontally.  But A) I didn't have any shock cord,  B) I didn't want to make big holes in the cover for a shock cord,  and C)  the stripes on the cover are vertical, and I thought maybe the loop might look better vertical when the light isn't on. 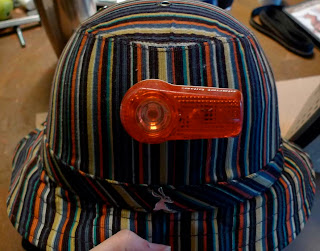 I did have some reflective grosgrain ribbon,  and I used it to make a vertical loop that blends in nicely with the stripes on the helmet when the light is off, but holds the light clip reasonably securely (I might close the loop down a smidge if the light starts falling off. 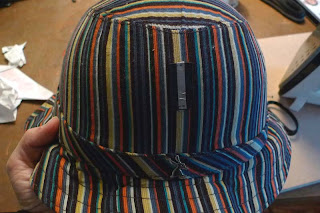 I also ironed on some reflective tape on my "ugly but warm" gloves across the back of the hand.   The gloves aren't much to look at anyway, and I only wear them riding, so I didn't spend a lot of time following the contours of the seams- just put a big bar across the back.  Not subtle, but hopefully will help when signaling a turn. I will need to remember not just to put my hand out, but to turn it slightly so that the stripe is facing backward. 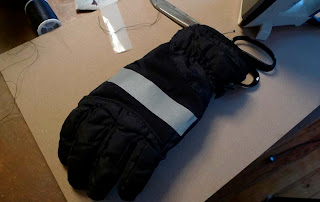 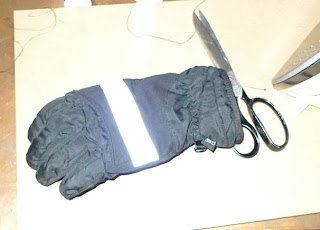 I have a lemon yellow "water resistant" trenchcoat, which has an inverted pleat all up the back, which I had been thinking would be a convenient place for a strip of silver that adds reflection without really changing the look of the coat. 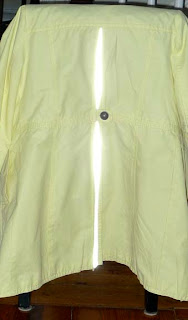 I may do the same thing to my favorite red wool coat,  but I'm more hesitant to alter it permanently- may add a sew-on strip instead of an iron on one.
I also had some reflective adhesive strip (basically tape),  and I put a stripe of it up one panel of my leather bag.  I didn't get it in between the seams quite as neatly as it could have gone, and the effect of reflective tape on a leather bag is a bit unusual, but I think it will be relatively unobtrusive,  mostly because it's captured between two seams, so seems a bit more like it fits. 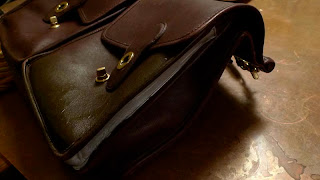 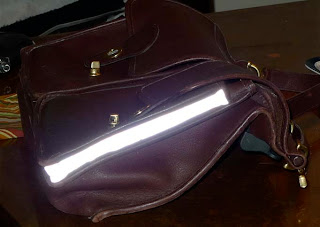 Put a tiny bit of extra tape on the Shogun,  hiding the orange VO sticker on the fenders.  I don't plan on riding the Shogun out after dark a lot (at least until I live the dream of touring)  but I think this adds a bit of reflectivity, without being noticeable. 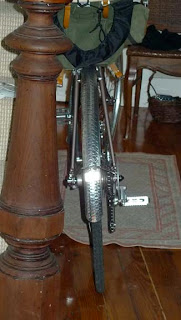 Next, I put larger patches of 2" wide tape both front and back on the new Linus panniers.  There's a bike almost always parked along my route, with silver reflective patches on the panniers that are left on it 24/7,  and I can see them from a block away in my bike headlight. 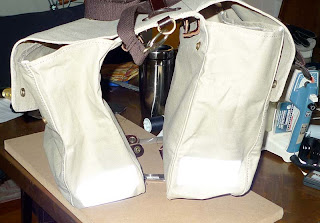 So I thought it would be a good addition that's not terribly incongruous with the look of the panniers.  I just cut  four 4" long pieces of tape, rounding the edges slightly to make them look a bit more finished,  and ironed them onto the heavy cotton canvas. 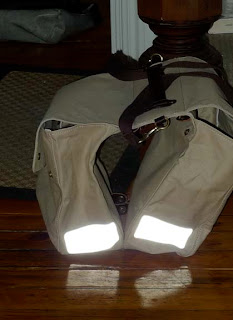 Finally I watched a movie and sewed a little strip of reflective grosgrain ribbon on my black softshell which is a good weight for biking, but which I don't wear much because a) it's all black and b) it's an odd length to wear with skirts. 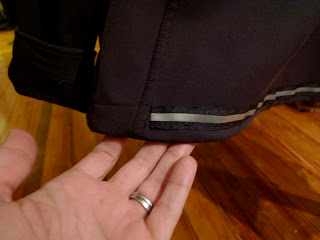 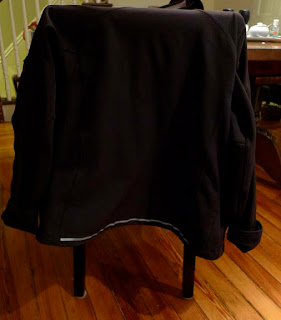 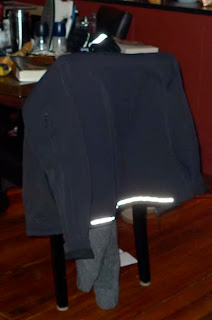 A very busy weekend of conspicuity projects- I should be very visible these nights!  I had a recent brief conversation recently about the reflective "vests"  made by Vespertine in NYC.  Admittedly they look very fetching on models, when worn over a tank top (or less)  but I'm not sure how they'd look thrown over a coat.  For colder weather clothing, I think that adding reflective material, either sewn on, or iron on, in such a way that it follows the natural seams of the garment is more effective because it's not something extra I have to remember.  If done well it doesn't have to look like a bike specific costume, but instead can be an "inconspicuous" part of an everyday piece of clothing or luggage.
Posted by cycler at 9:46 PM