As reader Old Knotty Buoy's sharp eyes noticed,  after a lengthy hiatus,  I'm riding Gilbert again! He had a collection of minor ailments, none of which were truly serious, but during the holidays, I just didn't have time to mess with them.   Over New Year's weekend, I hoisted him up on the stand, and set to work.

First:  new tires. The old tires, after 18 months and about 4,000 miles were showing some cracking in the sidewalls.  I don't really know if that's "good" or not,  and I could have continued to ride them, but they made me a bit nervous, so I decided to switch them out with identical Schwalbe Delta Cruisers in cream with reflective side bands.   Removing the rear wheel is always a bit of an ordeal on an IGH/ hub brake bike,  so I don't want to do it often,  but it went reasonably smoothly.   For some reason I find removing and re-seating tires on rims to be really hard-  does it really have to be that hard?  Isn't there a better solution?  Like expandable/ contractable rims? or shrink to fit beads,  or something?  Anything?  I would say that my hands just aren't big or strong enough, but I called in reinforcements, and the Scientist was struggling too.  And I'm not sure if Archimedes was right- I'm not sure that longer levers, or a better place "to stand"  would have solved the problem.

While I had the wheels off,  I did some messing with other things- cleaned and waxed the inside of the fenders,  and removed the rear tail light. 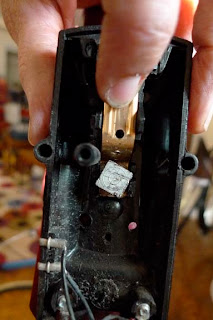 The tail light is held to the fender with a bolt whose square head is captured in a notch in the plastic housing.  Unfortunately the plastic cracked, and the head was rotating, loosening the tail light so it wobbled a bit,  and making it impossible to either tighten or remove.  I ended up taking it apart from the outside,  using my brand new from Christmas impact driver to coax out one semi- stripped screw.   I replaced it with a normal hex head bolt, ignoring the plastic slots.  To remove it, I'll have to take it apart from the outside again, but I'm OK with that,  and hope not to remove it for a good long time. 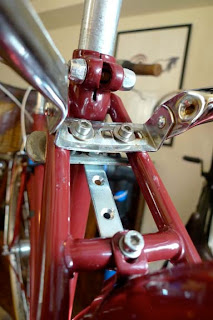 I  also did a bit of messing with his rear rack.  The rack is a NOS Steco, designed to be mounted to the seat stays with clamps instead of to the axle bolt.  I didn't like how that looked, so I replaced the legs with a pair of sawn off struts from a "sissy bar" seat.  I used the existing crimped places in the struts as locations for the holes,  and it never was quite level.  The rack was held "up" by a little metal strap, attached to the brake bridge.  Either the strap was too short or the struts are too long.  It will be a complicated project to shorten the struts, so I tried replacing the strap, with a slightly longer "mending plate".  It's better,  but it's still not dead flat level.

I also had more struggles with the pie plate.  Something- either the chaincase, or the pieplate, or both got tweaked, and although I could press fit the pieplate into the chaincase, using a bunch of clamps spaced around the edge, as soon as I removed a clamp, it would pop out again.  I spent a lot of time thinking about options for brackets, magnets, shims,  maybe even caulk,  and decided finally that I needed a removable adhesive- something that was flexible and sticky, but that wouldn't prevent me from taking the plate off, and wouldn't leave a residue on the bike.  I was very hopeful about "fugitive glue"  aka credit card glue, aka "gorilla snot"- the stuff that holds credit cards to mailers.  You can buy dots of this glue at art supply stores, and it held for about 24 hours, but on the first ride, it came off.  I have so far had more success with removable 3M adhesive foam squares.  You can sort of see them around the edge, so it's not super elegant, but it's working for now.

The final projects were pedal and kickstand.   I must be pedal-challenged, because on my first ride after the saga of the left pedal, I was about halfway home when I realized that my right pedal was loosey-goosey.  I must not have properly tightened it, and had in the process of riding to work and back, managed to strip the threads on the crank and the pedal- not completely, but enough that they didn't thread smoothly.

I do think that long term I will replace the BB on Gilbert with a Phil Wood, and convert him to cotterless cranks.  However, for now,  and since I'd just wrecked the thread on a brand new pedal, and a crank,  I decided to take the semi- drastic step of red- loctite-ing the pedal into the crank.  Basically, if the pedal lights fail,  that will be my cue to replace the whole shebang.  It just seemed wasteful to trash both the light and the crank.  I'll put in another plug for how much I like these pedalites, and how I think that the company is a really good one.  I know I've managed to wear out a couple of them,  but when I wrote them asking if they'd sell me just a couple of the gears that had stripped, instead, they sent me a free pair of pedals,  without asking.  I'll definitely put them to good use,  as I really think they're a great safety product- the strobes are super bright, and they don't have much impact on the overall appearance of the bike.

The kickstand was another issue.  When Harris replaced the left crank,  it was a milimeter closer to the BB.  And thus with every stroke I had a tic- tic- tic of the crank hitting the kickstand.  I could twist it out of the way,  but it would slowly twist back as I rode.   No matter how I'd tightened the bolt down I never really could get the body of the pletscher two legged stand to stay still where it was attached to the frame- I got really good at nudging it back with my heel,  but it was annoying.  So I decided to remove it but it was really dug in.  I put PB blaster on it and then tried again, this time with a cheater bar on my allen key..... and promptly rounded the allen key recess.  sigh.

I attempted to epoxy a hex bolt on the top of the "screw"  but  it just sheared right off.  So I drilled it out,  which was a real PITA- not a lot of space to get the drill in between the fender, the chainstays and the seat tube.   Finally got the kickstand off the bike, but the kickstand body still had 2" of jagged edged bolt sticking out of it.  It turns out the bolt is steel, and the body is aluminum, and dissimilar metals like that will sometimes chemically bond, or "gall," especially in wet and salty areas. It's a common problem in marine applications and car water pumps, Google tells me.   In future,  install dissimilar metals with anti-seize compound (from the auto-parts store).  Anyway,  I tried heating it with a torch,  more and more PB blaster,  and some serious attempts with a vise, and a pair of vise grips- no luck.  Finally I gave up and ordered a new kickstand.

I knew I wanted a two footed one- it's just much more stable for the kind of loads I put on my bikes.  After my frustrations with adjusting the Pletschner, I decided to try the U-shaped type instead of the scissor type.  Hebie makes one called the bipod, which the internets say great things about.  But they don't have a US distributor,  and the only one I could find in the US was a "resin" model,  which I was a bit skeptical of.  Sunlight (the cheapo bike products company) makes one , but I didn't trust it at all.  I was contemplating ordering one from Europe, when I found what's listed as the "civia "  stand.  Civia doesn't list the stand at all on their website,  but a couple of people were selling it on Amazon,  for $40 cheaper than buying and importing a Hebie would be, so I took the chance.   It arrived today, and I installed it with rudimentary tools at my desk after work.  So far so good- although I need to give it a final adjustment and tighten it down more firmly. It appears solidly constructed,  doesn't seem too heavy,  and operates smoothly.


The final product of all this tinkering: 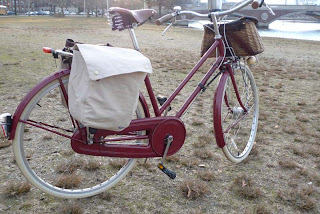 As you can see in the "final" photos, I have a couple of other additions/ Christmas presents- a coffee mug holder and a new pair of saddlebag panniers- the roll up shoppers from Linus.  Reviews coming soon!

Sorry for the super lengthy post- you can understand why Gilbert was out of commission for over two months while I got everything sorted out!
Posted by cycler at 10:04 PM