There has been a giant and persistent "puddle" along my route- on Main just past Kendall, and just before the Longfellow.   It didn't seem like it was natural- it was huge, even days after a rain.   It was in an area that didn't slope towards the drain,  but the puddle was so big, that I suspected it was a water leak.

And now that the days are getting cold, it had turned into a giant ice slick, which filled the entire bike lane and spread halfway across the car lane.

I filed a pothole request for the city of Cambridge last Thursday  and within 24 hours they had salted the bejeezus out of it- solving the ice slick problem at least. 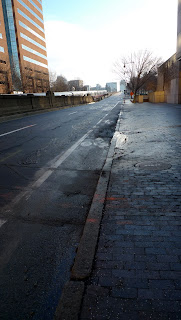 Today when I rode it, the puddle was gone,  there was a patch in the pothole at its heart,  dig safe had marked up all over the sidewalks, and there was a dirt filled hole where I bet they repaired the water line. 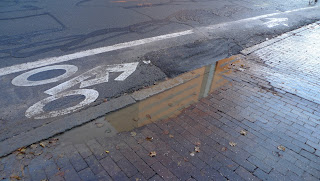 They still have to get the dirt filled hole fixed,  but it's really nice that they take things like this seriously and fix them quickly when they endanger cyclists. 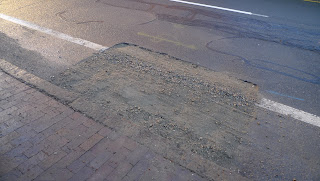 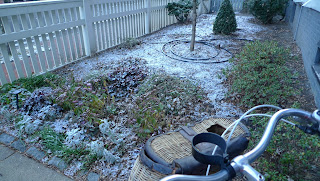 We woke up this morning to a dusting of snow on everything.   I biked really slowly in- didn't have any problems with slickness, but everything had a sheen on it- was hard to tell if it was water or ice.

I kind of hoped it was urban legend, but this woman was actually applying foundation to her face sitting in her car.  She was at a stoplight, and I fervently hope that she desisted once she started moving. 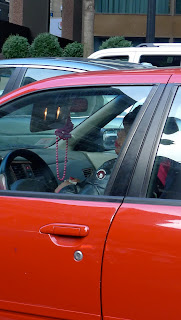 Finally, a reminder that the meeting about improvements to the minuteman crossing of Mass Ave and Rt 60 is tonight.   The East Arlington anti- bicycle folks will almost certainly be out in force to oppose the city spending the grant they already have to make this complicated connection safer and more comfortable for people on bikes,  so it's important to have as many supporters of the project as possible.   They've got the money, and something will get done, the question is how ambitious and safe will it be?
7pm, Arlington Town Hall.
Posted by cycler at 9:26 AM