I arrived a tiny bit late for the Boston Bikes 2011 Update, given by Nicole Freeman, the Boston Bike Czar, and sponsored by Livable Streets.  To get to the BPL from the financial district, you either have to go through chinatown on some gnarly streets, or have to deal with the  Boston Common/ Public Gardens  which are ringed by 3 and 4 lane roads which are under capacity, and thus fast moving.  They also have funky one-way issues.  I normally avoid Beacon Hill (because of the hill- I dislike climbing with traffic behind me which can't pass safely) and do a reverse S,  following Tremont to Boyleston, then turning right on Charles, then left on Beacon, then left again at Arlington, thence to Comm ave and the bike lane.   This is pretty icky in a couple of spots, merging with fast moving traffic.  Charles st between the park and the common is just begging for a parking protected two way bike lane, and seems to have lots of space for it.
I hear rumors of it continuing down Charles to MGH, which would be awesome. 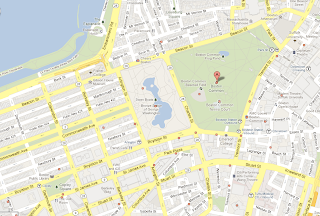 Today though I took the "easy" way, by getting off my bike in order to make a "left" turn" at Charles, cutting across this plaza to Park Plaza St. I saw 2 other bikers doing the same thing (they just rode on the sidewalk) so it seems to be a fairly well known cut-through, and one that I think the city should consider formalizing. I was kind of counting on Mass Bike providing a bike valet, so I was in trouble when I realized that they weren't this year, and that every available post in a 2 block area was taken. I followed the lead of some other guys and pushed some planters away from a post to get within locking distance

I also "had" to double back to check out a nice looking vintage DL1 parked in the packed bike rack.
I've only seen one other ladies' one (Velouria's) out and about.  This one looks like it's in really great shape.
Turns out I hadn't really missed anything, because the Mayor couldn't make it, and his deputy spoke instead. I won't recap the whole thing, except to note a couple of points.


1) The place was packed-probably 500 people? Standing room only at the back and nary an empty seat. People were jazzed,with standing ovations for a couple of things (Mass Ave bike lanes and the Lifetime achievement award for Jessica (formerly Doug) Mink.)  Jessica made a nice speech about how every 5 years she goes on a bike ride that's her age in miles, and that the difference has been dramatic lately.)

2) I found it awesome that if you looked at the crowd sitting in the auditorium you would not have known it was a "bike" crowd. It could have been an author reading or a history lecture. People were there in normal clothes, and it was a pretty diverse group in terms of age and gender. It changed a bit when people left and donned helmets and yellow jackets, but still.

3) I think that Boston Bikes has done an amazing job of outreach to inner city communities in building bike ridership. Dramatically subsidized Hubway memberships, hands-on programs in schools, the "roll it forward" program to fix and donate bikes, and the farmer's market clinics developed with Boston Cyclist's Union.  I know that DC and Portland have had issues with bicycle infrastructure being equated with gentrification, but it makes a lot of sense for dense, low income and transit underserved neighborhoods to have lively bike cultures, and I think that these projects, combined with improvements in infrastructure could help make that happen.

4) Steve Miller of LSA made a great point, that to be a truly great bike city, the city will need not just to accommodate bikes, but to prioritize them.

A couple of suggestions I would (and did) make.
The city is moving towards centralized pay station parking, which I think is great as it allows them to adjust rates to suit demand. However the bike parking problem at the library is partly because all the meters were removed. I hope that the city will put in a standing program to convert a certain number of meter posts per block to bike parking, either by adding rings, or removing the cores and leaving the heads. We've been lucky with snow this year (might change tonight) but I wish the city would develop a list of "priority" bike lanes in parallel with the "snow emergency" routes.  This metric would be useful to organize maintenance, snow clearing, enforcement of parking violations etc, and I think would be helpful in making the DPW think of bikes as transportation, not just recreation.

After the talk, livable streets invited people to gather at a bar across the way. This was a lot of fun, because I got to hang out with Bikeyface, Megan (from Boston 3 speed club/ Boston Retro Wheelemen) and Josh from Boston Bikesafe.  We did some planning and scheming, and I'm hoping we'll have some progress to report soon on a new bike social event...

And although it seems mundane in a week where I'm going to two of them, I guess I'll call this Utilitaire 12.8 (community meeting) and yet another of the ones completed after dark.  Riding after dark being a fact of life this time of year.