Getting Back into the Groove

After coming back from a week away,  I was greeted with an empty fridge and a smelly compost bin (yuck).  And being away from the bike for a week meant I was getting behind on my Utilitaires.  Fortunately for purposes of the game, Sunday is part of the week before,  so I still had a chance to pull a double and get both 12.6 and 12.7 as I ran my normal errands, even if they weren't terribly exciting categories.

First I went to the grocery store(s).  I take my compost to Whole Foods since they make their bins available to the public.

I try not to do it on the weekends, because they get packed and sometimes really grody,  but I didn't want to wait any longer than necessary, and fortunately they weren't overflowing. 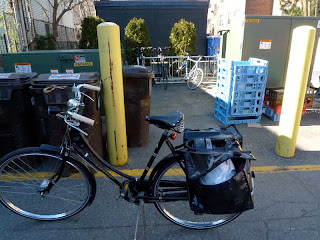 One cool Whole Foods thing that I keep meaning to blog about is that they have dedicated employee bike parking (visible in the background).   I guess anyone could use it, but I suspect that because it's behind the dumpsters, most customers don't seek it out.  While I was there, I stopped in and bought ground beef for a giant pot of spaghetti, and a batch of enchiladas. 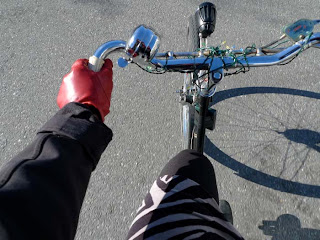 Next I went to the "regular" grocery store, for sodas and less "whole" foods. I ended up with just a bit more than would fit in my panniers,  so I did the same trick I did two weeks ago with "outriggers" to my panniers. 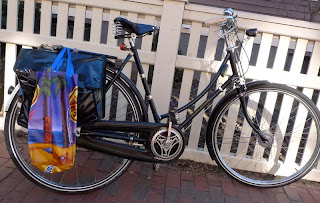 It was fairly windy, and there's one stretch of Green Street (right outside the Green street Grille)  which is this crazy wind tunnel- I notice it often, and this day, it was so bad I had to stand up and pedal to keep moving forward in my lowest gear!
When I got home,  I turned some of those groceries into pannini sandwiches for the Scientist who was working on a  grant.   I also started a huge batch of spaghetti sauce with home canned tomatoes.   One of the advantages of canning my own tomatoes, dried beans and chicken broth is avoiding BPA can linings.   Unfortunately the inner surface of metal canning lids is lined with BPA.   Since the food is only in contact with the lids when it's boiling during canning,  I think it's probably safer than regular cans,   but I'm doing some research on reusable BPA free canning lids, and think I'll probably order a bunch of them for use on pantry staples.

Once the spaghetti was simmering away,  I headed out into that wicked headwind  to Target, (a store that is not a grocery store) to return a bunch of Jason Wu stuff that I had ordered online and then was too large to fit :(   I was riding on autopilot a bit, and ended up on the Home Depot side of the road without thinking about it.   Since I was there, I stopped in briefly to get some clips for wiremold.  Because you never know when you'll need them right?  I couldn't resist browsing the garden center, but honestly it's not THAT warm yet. Last frost here is supposedly 5/3,  and we're supposed to get snow later this week. 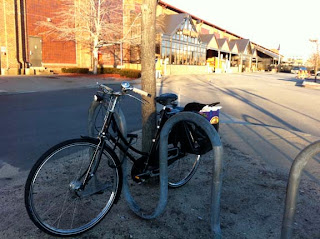 When I was coming into the parking lot, I passed a guy biking out with a trailer full of building supplies!  And here I thought I was (almost) the only one!  I rang my bell and waved,  but couldn't get the phone out fast enough to get a picture.

At Target I returned stuff,  and bought tax software and lip balm.  Somehow a bag of Easter candy managed to find its way into my bag too :)  and some long lasting lip color, which I'm surprisingly excited about- it's hard to find colors in target-style cosmetics, and I lucked out with this one.

I headed back "inland" through my old stomping grounds in east Watertown, and stopped again at the Star on the Cambridge line to grab a couple more red peppers for snacks at work this week.  I neglected to get any pictures, but unlike a month ago, it wasn't totally dark at 5pm!  Then home to make enchiladas, and stay up way too late watching the Oscars!   I'm going to see if there's anywhere that's still playing Hugo, since the only way to see the 3D is in a movie theater.