Coincidently, I found out about the Utilitaire just two days after I made an appointment to get my haircut.  I don’t get my hair cut very often, every couple of months, so it’s just luck I happened to be able to complete this one.  (BTW,  I think that the Utilitaire rules are pretty flexible about substitutions,  so if you don’t need your hair cut, you could document going to the dentist, the doctor,  massage, pedicure, whatever).

I wore my favorite score from the Jason Wu for Target collection: a red and navy cotton dress with a lovely full skirt.   It’s even got pockets hidden in the pleats.  I put a long sleeved shirt under it, as it’s not really sleeveless dress weather yet, but it looks a bit schoolgirlish.  It had a tendency to ride up against my tights, but hopefully that will be less of a problem in the summer without tights. 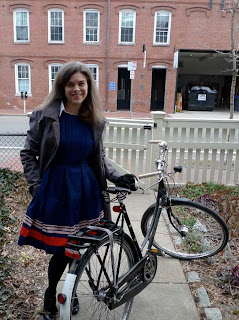 I’ve also been meaning to report on my new long coat, but haven’t gotten around to getting photos of it.  It’s from Nau,  and it really fills a niche that I think is underserved- normal clothing with technical features.  I think that’s Nau’s thing in general- to have normal, or perhaps even a bit fashion forward styling, but true waterproof-ness,  with sealed seams and zippers.   Although it’s interesting- chatter about Nau on the internet  seems to be equally divided between bicyclists and hard core fashionistas.
I ordered the “Shroud of Purrin Trench” in “Hellebore”,  which is a purplish grey that is a lovely color although a tad hard to match with my wardrobe that leans to reds and greens.  The fabric is something "waterproof-breathable" with a laminated barrier,  but unlike most shells, has a lovely wale,  not quite corduroy, maybe more like heavy twill?  You would never know it was a "technical" fabric if you didn't read the specs. 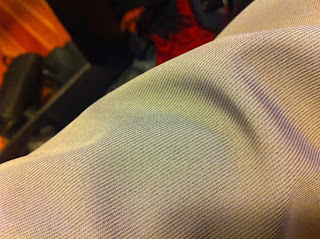 I ordered the Hellebore because it seemed the lightest (compared to dark brown or black)  but it's fairly dark in person.  I’m scheming about how I could possibly add a tiny bit of  reflectivity.  The best thing would be a tiny bit of piping down the back seam,  but I don’t want to open up the seam, since it's specially sealed for water resistance.   I really like the length, which hits just above my knee when I’m on the bike, which keeps me noticeably warmer (or dryer).    The zipper can be raised from below if you want more air. The hem is asymmetric, with a longer tail than front, which I think is a nice line when you’re off the bike. 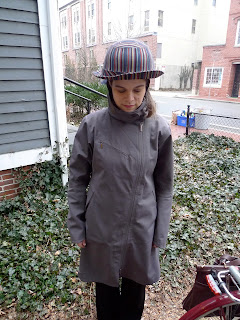 Also asymmetric, the zipper comes into the side of your chin instead of the front. The collar has a buttonhole and button to allow you to fasten the collar up to warm your neck.  I didn’t think I’d use that feature, but it has come in handy a couple of times when I didn’t have a scarf for those first chilly minutes before I warm up.
The trench is very waterproof- I rode home one night in a pretty hard rain, and was completely dry- just shook it off and went to dinner on foot.   The only reservation I have is that it’s a bit too warm.  Although it doesn’t have much of an insulation layer beyond a light fuzzy liner, I find it keeps me much warmer than the weight would indicate.  Part of that may just be the windproof-ness, part of it might be the waterproofing.   If the temperature is higher than the low 30’s I’ve found I end up unzipping completely or  even having to remove the jacket. 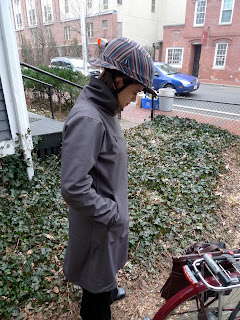 YMMV, as I may have a tendency to run a bit warm.    If we had a winter like last year with lots of cold and icky days, it would probably be perfect.
Back to the Utilitaire:  I rode home the 6 blocks from the salon without my helmet, although it probably wouldn't have made much of a difference to the "'do", but I hated to spoil a professional blow dry.   Minerva's lighting system has already been described, although I will add that I looked up the specs on the rear generator light- it's a Busch&Muller Topline Plus,  which I've been very impressed with.  I think it's much brighter than the fender mounted 4D fender mounted light I have on Gilbert.
Posted by cycler at 8:45 AM