I've seen this guy riding around a couple of times (I counted him going both ways on the Longfellow when I did my bike count)  but I'd never seen him with his passenger. 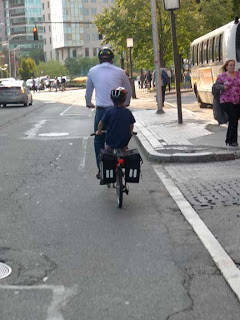 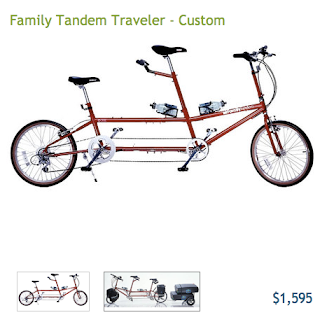 I can't actually tell how it folds from the photos,  but it claims to fit in a suitcase.
I don't know if it would be simple enough to fold on a daily basis, but if it were, it could be a good solution for someone looking for a kid bike with a tiny apartment.   Longtails aren't much worse than a normal bike to store, but Bakfiets and cargo bikes are not easy to fit in a city apartment.
It claims that the stoker can be from 3'6" to 6'3"  so it would be useful for a long time.

This is clearly their daily child transport bike, as I see the father riding with the empty bike (presumably after drop off) quite often.  I think it's an interesting option that you don't often see for kid transport.

Oh,  and one of the things I noticed during the bike count was the surprising (to me) number of folders.  I didn't track it exactly, but I suspect that it was 10%, which is pretty high.
Posted by Cycler at 7:56 AM