I hadn't seen my friend Silent q recently as she's missed a couple of Women who bike brunches, and since she was also going to miss the next one, we made plans to go for tea together.

Since it was likely to be a lovely Indian summer day, we biked out to The Tea Leaf in Waltham.
We rode along the river path almost all the way to Waltham center, and then cut across to the end of Moody street where the shop is located.   Since she was riding her brand new Surly Cross Check, and I wanted to keep up, I rode the Shogun.
After a bit of rain this morning, the weather turned lovely- crisp and just warm enough to be pleasant, and it was a gorgeous ride once we cleared the heavy traffic part of the path near Harvard sq.

We were starving by the time we got there, and we dove right into the finger sandwiches and sweets before I had a chance to take a photo:
While we were "in the neighborhood"  we swung by Harris Cyclery, where she had bought the bike for a bit of a mini-tuneup. 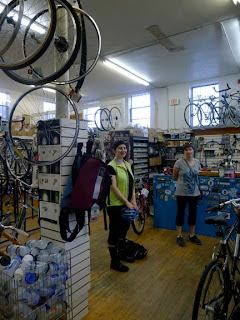 I treated the Shogun to a Radbot 1000 rear light, partly because I've been wanting to try one, and partly because I lost one of my planet bike superflashes, and a needed a dedicated light for this bike in case I get caught out after the ever-earlier arriving darkness :( 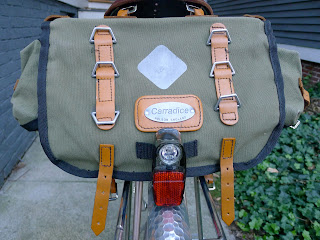 There was a cool old Raleigh, almost but not quite a mixtie.  It actually has almost an identical frame to a Betty Foy (there was one sitting right next to it) 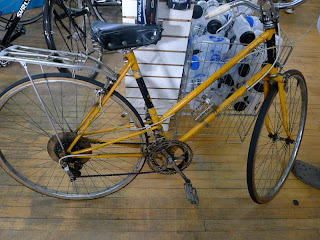 It had a really cool old school water bottle cage on it: 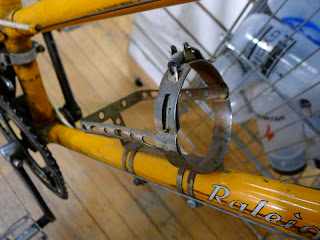 The cage has a spring-loaded hasp to hold the bottle tightly: 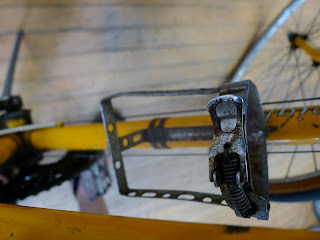 They've improved the Brooks display area since the last time I was there- the oriental carpet seems slightly out of place in a bike shop, but it does definitely set that area apart. 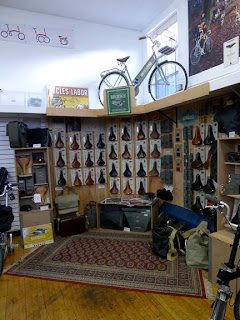 I love the the Rivendell headbadges-  would love to have taken this Atlantis for a spin, but it was closing time, so it'll have to wait for another trip. 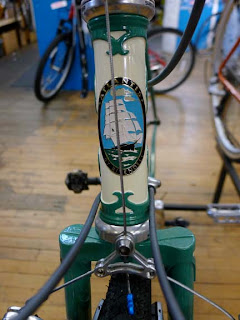 At that point we hit the roads, taking Watertown street into Watertown sq, then following the river path on the Boston/Newton side all the way back into Cambridge 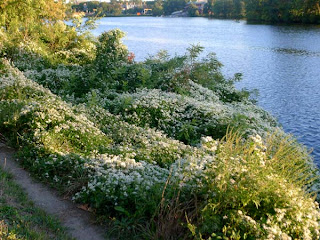 When we stopped to part ways,  I was amazed at the honeysuckle growing along the river.  I don't think I've ever noticed honeysuckle along there, and now it's growing on everything-creating an undulating carpet of silver blooms.  It might be an invasive weed, but it sure smells heavenly.

It was a lovely 18 mile ride (according to Silent q's computer,  and the Shogun was very comfortable for that distance. I may finally be breaking in the saddle I think.  I feel more like I'm settling into the saddle and less like I'm perched on top of it, sliding around.  I might start to look for some gloves if I'm riding much further though, as the combination of the skinnier tires/ more vibration and having more weight on my hands makes me really feel the ride in my hands.