Today I rode my bike for the first time in over two weeks.  I got a bad cold over Christmas,  and just when I thought I was over that,  I got a case of Strep throat which put me out for another week.

I couldn't have asked for a better day to start riding again, as the weather on this 14th of January is freakishly warm (high of 60+) predicted.  I was at a job site first thing (via Zipcar)  and then rode in around 11AM.   Gilbert is up on the rack while I fiddle with the chaincase, so I rode Minerva for the first time in a while. 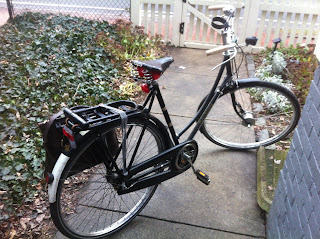 There's a psychological barrier to riding in traffic again after a long time off the bike.  I get used to the sense of cars riding not too far away from me, and I lose that after too long off the bike, and tend to get tense in traffic.   Riding at mid-day, with the lighter traffic made that easier, and I even cheated by riding on the Charles river path for most of it.  We'll see how my resets are when I ride home tonight.
It's also hard because I have to ride vehicularly for significant portions of my commute, and when you're still recovering, it's tough to ride as fast as often feels necessary when riding in traffic.  I wish it weren't that way, but unfortunately it's harder to ride at a slow comfortable pace when you have a delivery van breathing down your fender.

As an advocate for more, and more separated, infrastructure,  I still take for granted the health and relative youth that make a lot of my riding do-able.  When my health is compromised, I'm reminded of  people who might be interested in riding, but who don't feel that they can ride fast enough or aggressively enough to be comfortable riding in traffic.  It renews my feeling that we need to do more to create safe spaces where everyone can ride at their own pace.
Posted by Cycler at 1:03 PM