Canning is stereotypically a summer/fall activity-after all, that's when the full bounty of the summer growing season is overflowing gardens and CSA shares.   I typically can seasonal fruit jams- strawberry in June, Blueberry in July, Peach in August, Raspberry in September, and Fig in October.

Peppers, green beans, tomatoes and carrots are in there at the appropriate times.

But I can in the winter too- not as often, but at least once a month.  It's a lot nicer to have a big pot of water boiling for an hour or more in January than in August- that's for certain.  I make a lot of beans, as they're a good easy protein source, and it's nice to be able to open a small quantity to have them ready quickly. When I was growing up my Mom would make "bean of the week" and then freeze it, so that there were always a variety of legumes available.  I don't have enough freezer space for that, so I can them instead.   They're not much different than store-bought canned beans except I can pre-season them with chili pepper and onions (pintos, black beans, cranberry beans)  or cumin and onion (chickpeas). 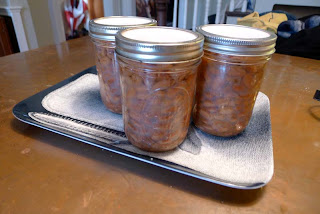 These ones were my first test of my new BPA-free, re-usable canning lids from Tatler that I got for Christmas.  One reason to can is that you can avoid the BPA lining that most commercial canned goods have,  but the lids still have a coating that has BPA in it.  While the food doesn't sit in contact with the lid, I think I'd prefer to avoid it if I can do so easily, plus these are re-usable, which will be nice. I was a bit worried about the system, but so far so good, and I think I'll buy a bunch more, as I don't want to feel like I need to "save" them. 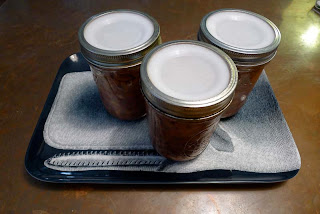 I also can chicken broth as I use it up.   I will go buy 10 lbs of chicken legs and backs- ideally from Mayflower Poultry- "Live Chickens, Fresh Killed" in East Cambridge. Making the broth takes a while, but canning only takes 25 minutes at temperature.  I need to do another batch, but it's a nice thing to do on a cold weekend.

Both of the above require a pressure canner, but last weekend I made something that requires just a hot water bath- Marmalade.  Citrus is in season this time of year, even if it's not exactly local.
After two trips looking for sour "Seville" oranges, I finally found some at Market Basket in Somerville. (hint, they're all the way at the end of the produce section, next to the plantains). 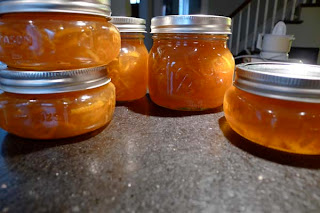 I followed this recipe, and it worked out OK,  except for my oranges weren't very juicy, and I had to supplement with other random citrus I had around (grapefruits, clementines, lemons).
It took forever ( four hours or so of chopping, pithing, cooking down etc), but the results were good, at least on the back of a spoon. 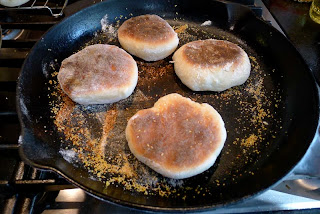 To test it properly, I made home-made English muffins,  from this recipe from King Arthur Flour.   They were very tasty, but the dough was really sticky and hard to deal with, and they had to rise a really long time, even in a warmed oven, and then took a long time to cook on the stove.  I think they were too much trouble for not enough improvement on store-bought to make them a regular thing.    They proved admirable marmalade vehicles though, and I very much enjoyed them on a cold winter morning. 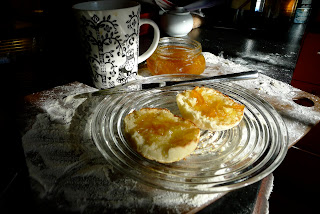 I know this is mainly a bike blog, but is there anyone out there that cans?  Do you do it in the winter, or just in the summer months?