This morning, riding in with temps in the low 20's, I had something happen that I'd heard about several times, but which in 4 winters of cycling in below freezing temperatures, had never happened to me:  My shifter cable froze.

This happens when a bit of water (it doesn't take much) gets into the cable housing.  In very cold weather, that bit of water freezes and suddenly the cable can't slide in the housing as it should, and you can no longer shift.

This is a little less common in IGH/ chain case bikes than regular derailleur shifting bikes, but obviously it can still happen!  Unfortunately for me this happened about 1/3 into my morning ride, coming down a small hill in 6th gear- 3/4 of full power.  This made riding up over the Longfellow bridge, riding up Beacon hill via Cambridge St, and any and all stops and starts in traffic a real workout.  I didn't have to worry about being cold (although my knees may have something to say about it tomorrow).

After a day in the warmth of my office, it shifted just fine, but on the way home I was careful, and never shifted above 4, and indeed, I got stuck there almost immediately.  I managed to make it to Cambridge Bicycles just before they closed, and bought triflow lubricant and a new shifter cable (just in case).  I was bracing myself to pull the cable, blow out the housing, lube it and re-install it, with a new shifter cable if I screwed the old one up somehow.  This is all do-able-  I did it when I first built the bike up, but it's a lot to tackle on a Tuesday night.  The guy I spoke to at Cambridge Bicycles suggested that before I do all that I should just try propping the bike upside down and dripping in lube at the ferrule on the gear-end of the shifter, with the hope that the water would be diluted enough/ displaced enough to not freeze on tomorrow's ride.

So I propped the bike upside down on the stand:
I removed the back of the chaincase, Pulled the cable end out of the shifter body, and pulled the end of the cable out of the stay. Then I dripped and dripped the tri-flow down the cable and into the housing,  shifting up and down a couple of times to get things moving. 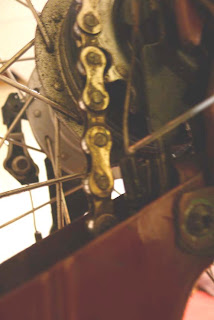 I guess I did enough, as it was finally dripping out of the shifter end of the cable.

I reassembled everything, which was much easier than it has ever been, thanks to a tip I noted at lunch on this very good video.  I always struggled to get the nut at the end of the cable into the notch on the shifter body.  Evidently there's a little hole, just big enough for a spoke or a small allen wrench,  and you can use that to torque the shifter body around, which makes popping the nut in a breeze!  How did I never know this trick before!

Tomorrow morning the temps are predicted to be in the single digits,  so we'll see how this works, or whether I'll have to ride Minerva the DL-1 until the weekend gives me a chance to pull the cable for real.  Hopefully I won't be stuck either in too low or too high a gear if it does freeze!


UPDATE:   Morning commute went just fine, but I've also ordered some of the fancy cable housings that Somervilian recommended in the comments, partly because at the moment, the cable is white, which doesn't match  the brake cables,  or anything else on the bike.   I'll replace it on a weekend though, instead of a weeknight, as it's a bit of a pain to get it in the chaincase.