We got maybe 2" of snow last night,  and I had to ride over to the Longwood area early this morning in it.   If I were just going to work, I might have taken the T, but there's no good transit connections between Harvard Sq and Longwood, and the roads looked pretty clear from my front door, so I decided to saddle up.  My typical route to Longwood is to take the river path to the BU bridge, and then across Brookline to Longwood ave, and across the J-way to the medical center. 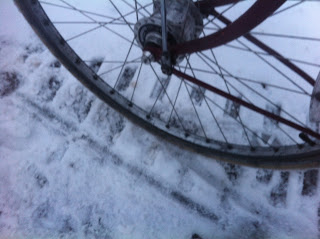 I think it's fantastic that New Balance pays for the clearance of these paths, but the state of the path this morning makes me think that Mass DCR isn't taking it seriously, or giving New Balance value for their money.  Just look at the clearing that Mass DOT did at the bridges (where their jurisdiction begins) compared to the half-assed job that DCR did.

I'm afraid that DCR doesn't take bicycles seriously as a transportation mode. I know that they're seriously underfunded, but if the paths in their jurisdiction are being counted by the state as major parts of the bicycle infrastructure, they need to be maintained as such.

I only saw two other bicyclists on the river path (probably because everyone else was smart enough to avoid it).  I did however see a ton of cyclists on the bike paths and roads in the Longwood area.  I don't ride there enough to do a comparison, but it felt like there were more bikers about generally than there were when it was so cold last week.  Maybe people who bailed and took the T last week got tired of that and jumped back on their bikes despite the snow.

I also had a great moment during the test that they were doing on me, where I was making small talk with the tech, and said I'd biked there.  He was going into the condescending driver mode, saying "oh, you really have to be careful of the cars, it's so dangerous."   That kind of thing always gets me annoyed- (how about the drivers of the dangerous  multi-ton vehicles be held responsible for being careful! instead of lecturing bikers).  But then the resident who was observing the test spoke up and said "it's not really that dangerous if you're careful,  I used to ride everywhere when I worked at MGH"  It was nice to have someone who obviously "got it" Which is part of why the Netherlands is so safe- even when people aren't biking, they're intimately familiar with what it feels like to bike, and thus drive more respectfully.

Riding back into work,  other than the 6 cars parked in the bike lane in Kenmore sq, things were pretty good.   The Comm Ave bike lane was very clear- more because of salting than plowing I suspect,  but either way it was much nicer than most of the bike lanes in Cambridge.